Chief of General Staff: Our goal is to withdraw Azerbaijani troops  from our territory without clashes 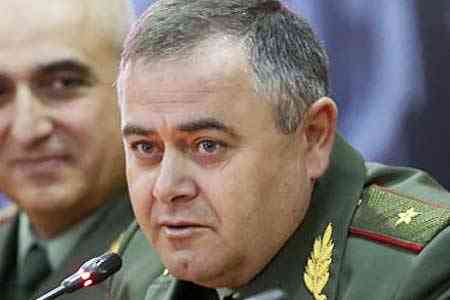 ArmInfo. Negotiations on the deployment of a Russian peacekeeping contingent along the perimeter of our border are still ongoing. Artak Davtyan, Chief of the General  Staff of the Armed Forces of the Republic of Armenia, told reporters  during a briefing on June 22.

In particular, he explained that the Russian side is participating in  these negotiations, the final results of which will be announced  without fail. "This is not only our desire, another side is  participating here.  Everything will be as we stated, but the final  results, including those related to the timing and technical  implementation, will be announced upon completion," said the head of  the RA General Staff.

When asked by journalists whether there is an agreement in view of  such confidence with the Azerbaijani side, Davtyan, in particular,  noted: "On our territory, we have nothing to ask the Azerbaijani  side. Negotiations are underway with the Russian side. And our goal  is to ensure the withdrawal of Azerbaijani troops from our territory."

At the same time, he denied information about any concessions from  the Armenian side in Gegharkunik, stressing that the Armenian side is  not ready for such manifestations. In this vein, he expressed the  hope that the issue will be resolved within the framework of the  negotiation process. Otherwise, appropriate decisions will be made.

Answering the journalists' question, Davtyan also noted that the  Armenian Armed Forces, if necessary, are ready to push out the  Azerbaijani troops by force, but this scenario is unacceptable. "We  are committed to resolve the issue through negotiations," summed up  the head of the RA General Staff.

It should be reminded that on May 12 and May13, Azerbaijani armed  forces illegally invaded and advanced 3.5 and 6 km deep into the  sovereign territory of the Republic of Armenia in Gegharkunik and  Syunik regions. Until now, they continue to illegally stay on the  territory of the Republic of Armenia. The Armenian side declares the  need for their withdrawal without preconditions, while emphasizing  the imperative of a peaceful resolution of the current situation.