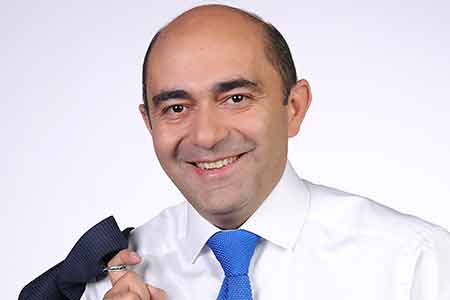 ArmInfo.Chairman of the "Bright Armenia" party Edmon Marukyan voted for solidarity in the country.

So, in an interview with journalists after fulfilling his civic duty,  Marukyan noted that he had voted to restore internal political  reconciliation and solidarity in the country from tomorrow.

"The elections for us are a chance in this situation to take this  step. We have no alternative, because we face much more challenges  than we imagine. From this point of view, we have no alternative, and  we must put aside our little truths in the name of a great value,  which is our state and statehood. That is what I voted for, "said  Marukyan.

When asked to assess the election campaign, he noted that the  vocabulary of campaigning in general was very depressing, and  children heard it. "From this point of view, there was a high level  of both agitation of hatred and agitation of violence. But  expectations of serious clashes did not come true. And I am sure that  expectations regarding today will also not be justified," the leader  of "Bright Armenia" said.  According to Edmon Marukyan, the voting of  our citizens will be such that there will be no opportunity for  post-election clashes. "There will be no one who will say that he won  alone, we will sit at the same table to form a government of national  accord. Only in this case we will be able to get out of this  situation," Edmon Marukyan emphasized.  In his opinion, those forces  that give out electoral bribes and those people who take bribes are  enemies in the post-war situation. "The power that gives out  electoral bribes is this power, let's say, representing Ilham Aliyev.  Such bribery is a mockery of the memory of the heroes. Did they give  their lives so that electoral bribes and bribes are continued to be  distributed here," Marukyan asked, urging citizens not to succumb to  the temptation of an electoral bribe, and decide how to vote.