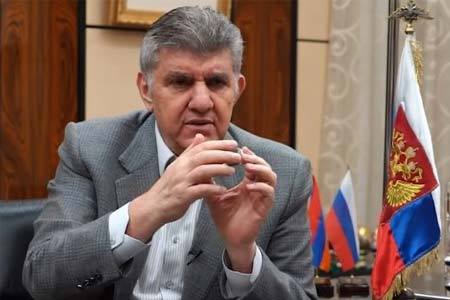 ArmInfo.Social division in Armenia has reached its peak. This is stated in the statement of the head of the Union of Armenians of Russia (UAR) Ara Abrahamyan.  "By  your silence, you contribute to the reproduction of power, which has  long since degenerated and degraded, but, despite this, still  dictates the political agenda in the country.

The social division in  Armenia has reached its peak. The forces acting in the country are  pushing society into the abyss. People are confused and against the  background of the absence of moral "beacons" and landmarks may again  fall prey to demagogues and traitors who stage hideous shows - with a  hammer or a sickle - in order to divert public attention from  internal problems and dangerous regional and geopolitical processes.   Governance of the state without dividing state interests from  personal ambitions and narrow command interests, against the  background of our destructive silence, led the country to the  situation we have today.  All this is happening, among other things,  because of the current indifference of the silent majority and the  fact that most of our elites have withdrawn themselves, mistakenly  believing that Pashinyan's "hammer" will fly past them. It will not  be so, today the life and fate of every Armenian is at stake.  Again,  like three years ago, we see how, manipulating the consciousness of  people, political forces are trying to stay in power.

I appeal to those who in 2018 were skeptical about our warnings about  the danger that came to Armenia along with Pashinyan. The situation  is much more critical today. Do not be silent! Express your position  openly, and not through anonymous Telegram channels and social  networks!

Come to Armenia or use other opportunities to be close to your loved  ones, relatives, your people at this fateful historical moment, help  them make their choice without fear. Explain to them how important  the voice of every patriotic Armenian is.

Neither you, nor your children and grandchildren will then forgive  you for today's silence and indifference.  Our people deserve a  better fate and a better inheritance from us, "the head of the SAR  says.