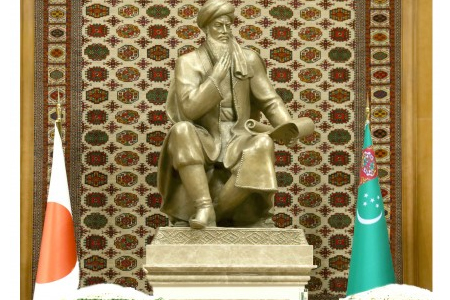 ArmInfo.On May 13, 2021, President of Turkmenistan Gurbanguly Berdimuhamedov had a telephone conversation with Prime Minister of Japan Yoshihide Suga.

During the conversation it was underlined that the high level of mutual understanding, trust and support inherent in the political dialogue of the two countries served as an important factor in further deepening bilateral relations.

The parties discussed the current state and prospects for the development of interstate partnership, as well as a number of policy issues of international agenda.

Expressing satisfaction with the productively cooperation between Turkmenistan and Japan both in a bilateral format and in the international arena, the interlocutors confirmed their willingness to intensify the dialogue.

President Gurbanguly Berdimuhamedov and the head of the Japanese government specified trade and economic partnership among the priority directions of the Turkmen-Japanese cooperation. In this context, the parties discussed the implementation of joint projects in the fields of energy, transport, communications and others

Along with this, the interlocutors underlined the role of cultural and humanitarian ties in bringing the peoples of the two states closer together.

At the end of the telephone conversation, which took place in a friendly atmosphere, the President of Turkmenistan and the Prime Minister of Japan exchanged best wishes.