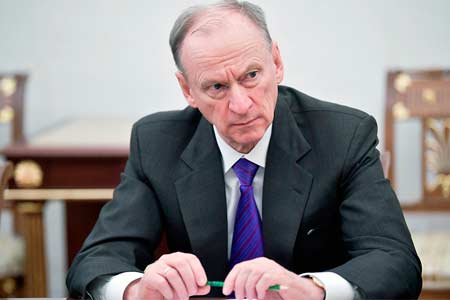 ArmInfo. Secretary of the Security Council of Armenia Armen Grigoryan held a telephone  conversation with his Russian counterpart Nikolai Patrushev.  As  reported by the press service of the RA Security Council, the key  topic of the telephone conversation was the situation on the  Armenian-Azerbaijani border. The parties exchanged views and  discussed possible solutions to the problem.

Presenting the situation, Grigoryan emphasized that Armenia views  this as an encroachment on the sovereign territory of the Republic of  Armenia by Azerbaijan. Pointing to the unacceptability of these  actions, he stressed that the Azerbaijani armed units must leave  these territories and return to their original positions.

In his speech, Grigoryan also stressed that the claims of the  Azerbaijani side are unfounded, that there are still maps of the  Soviet period, confirming the belonging of these territories to  Armenia.  Speaking about Armenia's appeal to the CSTO, the Secretary  of the Security Council also pointed out the importance of launching  the necessary mechanisms within the Organization for a speedy  resolution of the issue.

In turn, Nikolai Patrushev highly appreciated the restraint of the  Armenian side in this issue, stressing the need to use all possible  diplomatic efforts to resolve it, adding that the Russian side is  intensively working at all levels to resolve the issue as soon as  possible.