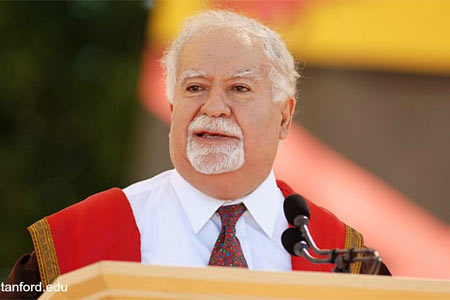 ArmInfo. The Aurora Humanitarian Initiative made a statement on the passing of Vartan Gregorian.

The statement in particular, reads: ''We are deeply saddened by the  loss of Aurora Co- Founder and member of the Aurora Prize Selection  Committee Vartan Gregorian (1934- 2021) - an outstanding  Armenian-American humanitarian, scholar, author, educator and mentor  and a dear friend to many of us.

As Co-Founder of Aurora and member of the Aurora Prize Selection  Committee, Vartan Gregorian worked tirelessly to help bring their  vision to life and give a second chance to those most in need. We  respected and appreciated his expertise and were grateful for his  invaluable contribution to the creation and development of the Aurora  Humanitarian Initiative.

Aurora mourns the passing of Vartan Gregorian and we send our  thoughts and prayers to Vartan Gregorian's family and to everyone who  has been impacted by his remarkable life. He may not be with us  anymore, but he will never be forgotten. His legacy will be  everlasting.

"The world has lost one of its leading humanitarians, the United  States has lost a great American, and the Armenian community has lost  a towering figure who was an inspiration to us all. On a more  personal note, I have lost a friend and mentor who guided my path and  my thinking in innumerable ways," said Noubar Afeyan, Co-Founder of  the Aurora Humanitarian Initiative and the Aurora Prize. "As we mourn  his loss, we also celebrate his life, filled with the most  extraordinary accomplishments. Vartan was a beacon of hope who  changed so many lives for the better."

"Vartan Gregorian's lifelong mission was to achieve peace and  prosperity, to give voice to the voiceless, and to empower the  powerless. He was a man of great inner strength, compassion and  wisdom. We will all miss him dearly," said Ruben Vardanyan, Co-  Founder of the Aurora Humanitarian Initiative and the Aurora Prize.

Born in Tabriz, Iran, Vartan Gregorian overcame countless challenges  he faced as a young immigrant to the United States and built a  successful international career that spanned several decades. He was  an ardent advocate of education and enlightenment, seeing books as  "stations of hope, education and better future."

In 1956, Gregorian entered Stanford University, where he majored in  history and the humanities, graduating with honors in 1958. Gregorian  was awarded a Ph.D. in history and humanities by Stanford in 1964 and  received the Danforth Foundation's E.H.  Harbison Distinguished  Teaching Award in 1969.

In 1981-1989, Vartan Gregorian served as President of The New York  Public Library and was widely credited with restoring the status of  the library as a cultural landmark. In 1989, he was appointed  president of Brown University. Brown became both more global, more  academically competitive, and more financially secure under his  leadership: during his tenure, he led a campaign that raised over  $500 million, bringing the institution's endowment past the $1  billion mark.

Gregorian was awarded numerous fellowships, including from the John  Simon Guggenheim Foundation, the American Council of Learned  Societies, the Social Science Research Council, and the American  Philosophical Society. In addition, he has received scores of  honorary degrees and has been decorated by the French, Italian,  Austrian, and Portuguese governments. Since 1997, Dr. Gregorian  served as the twelfth president of Carnegie Corporation of New York.  In 1998, he was awarded the National Humanities Medal by President  Clinton, and in 2004 he was awarded the Presidential Medal of  Freedom, the highest civil award of the United States, by President  Bush.

In his lifelong mission to achieve global prosperity and peace,  Vartan Gregorian was a strong voice that always spoke up on behalf of  the most destitute. Committed to the eradication of genocide,  discrimination and persecution, he has become a mentor and a beacon  of hope for all inspired by his empathy and determination. He guided  the younger generation with kindness and acuity, changing lives and  constantly leading by personal example of selflessness and  commitment.

A prolific author, Vartan Gregorian published several books,  including The Road To Home: My Life and Times, Islam: A Mosaic, Not a  Monolith, and The Emergence of Modern Afghanistan, 1880-1946.