Arman Babajanyan: Moscow wants to get Yerevan`s consent to Baku`s  membership in the EAEU in exchange for the return of prisoners 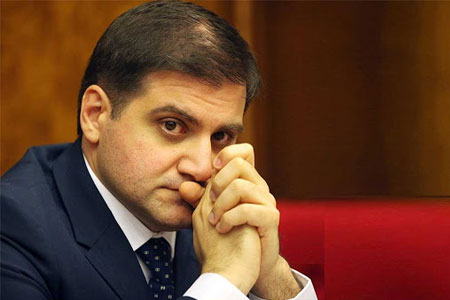 ArmInfo. Armenia cannot be in the same economic union with Azerbaijan, said Arman Babajanyan, an independent lawmaker of the RA National Assembly on April 16 from the rostrum of the parliament, referring to the possible membership of  Baku in the integration union.

"The Russian authorities, at the moment think that they will be able  to convince Armenia give consent to Azerbaijan's membership in the  Union in exchange for returning prisoners, "he said.  According to  the independent MP, Armenia does not have the right to link the issue  of EAEU expansion with the return of prisoners.

"Armenia cannot be in the same economic union with Azerbaijan until  we have formed a final position on the conflict and there is no peace  treaty with this country. This should become our foreign policy  relationship," Babajanyan said.

According to him, "if today Russia is not able to ensure the full  implementation of the agreement initiated by it and force Baku to  fulfill its obligations under the document," then "this speaks of the  influence of this state on Baku" and the "new agenda" is not able to  change the course of things. "This cannot be acceptable for official  Yerevan," Babajanyan stressed.

Meanwhile, a little earlier, Deputy Prime Minister of Armenia Mher  Grigoryan said at a briefing in parliament that in the near future  Armenia will present its position on Azerbaijan's participation in  the upcoming meeting of the EAEU. Answering the question, whether  Armenia made the question of returning prisoners a precondition for  consent to Azerbaijan's participation, and whether this opportunity  will be used, Grigoryan answered with the question: "To whom?" As the  Deputy Prime Minister pointed out, the issue of prisoners of war with  Moscow is being discussed in a constructive format and he hopes that  solutions will be found. "If you consider this to be another  opportunity, then this opportunity will be used," Grigoryan said.

Earlier it was reported that Azerbaijan could begin the process of  integration with the EAEU countries already at the upcoming meeting  of the Eurasian Economic Union at the level of heads of government  which is scheduled for 29- April 30 in Kazan.