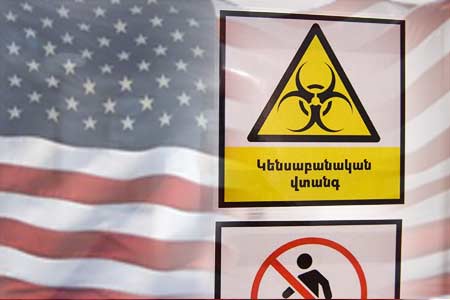 ArmInfo. The US Embassy in Armenia denies the information about Washington's expansion of the program for the study of deadly viruses in Armenia.

A number of Armenian media outlets have disseminated information that  the United States is expanding its program to study deadly viruses in  Armenia. It is noted that the representatives of the Pentagon  allegedly have unlimited access to the resources of Armenia in the  field of biotechnological research and intend to expand  military-biological activities in Armenia, up to the development of  "combat viruses".  In this regard, ArmInfo sent a request to the  American diplomatic mission to verify the accuracy of this  information.

The US Embassy in Armenia noted in particular: "The above-mentioned  publications have nothing to do with reality. The United States and  Armenia have established cooperation on a wide range of bilateral  issues: economic, political, judicial, and security issues."

At the same time, the diplomatic mission recalled that since 2008,  cooperation has also included support for Armenian laboratories,  which are vital for improving Armenia's ability to detect and isolate  diseases. "For example, independent testing and research of COVID-19  in Armenia, in conditions of a high level of laboratory biosafety and  biosecurity, preventing the disease from becoming a pandemic.   Everyone is well aware and has repeatedly stated publicly that these  are local laboratories run by Armenian specialists, and the Armenian  government independently controls access to the laboratories," the US  Embassy in Armenia concluded.

Recall that in 2016, with the funding of the US Department of  Defense, three laboratories were opened in Armenia - in Yerevan, in  Gyumri and in Ijevan. After their discovery, the Armenian and Russian  media periodically publish widely that these laboratories are  dual-use facilities and can be used for military purposes for the  creation and production of biological weapons. The US Department of  Defense allocated $15.5 million for the creation of a reference  laboratory in Yerevan, and the total amount of funding amounted to  $18 million.

In Yerevan, $4.1 million was invested for the complete construction  of the reference laboratory of the Department of Food Safety for  Particularly Dangerous Pathogens of the Ministry of Agriculture of  the Republic of Armenia, and $9.8 million was invested by the US  government to repair the reference laboratory of the "National Center  for Disease Control and Prevention" of the Ministry of Health of the  Republic of Armenia, ensuring the seismic stability of the building  and creating the necessary laboratory infrastructure. An additional $  1.7 million was allocated for both laboratories to purchase new  equipment and furniture.

It is noteworthy that Moscow and Yerevan announced the start of work  on a document on the admission of Russian specialists to American  biolabs in Armenia in 2018. Moreover, on November 11, 2019, at a  joint press conference in Yerevan, the Foreign Ministers of Armenia  and Russia announced the completion of work in this direction, and  the expectation of approval of the document at the interdepartmental  level in the two countries. However, after that, all the talk on this  issue died down.