Parliament did not support Levon Buniatyan`s candidacy as PSRC member 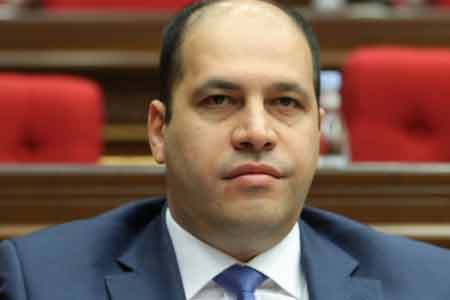 ArmInfo. The National Assembly of Armenia reacted ambiguously to the candidacy of Levon Buniatyan as a new member of the Public Services Settlement Commission (PSRC).

Buniatyan's candidacy was nominated by the ruling My Step party.   Criticism fell upon Buniatyan, in particular, due to the fact that  the latter was unable to answer a number of questions, referring to  the fact that he does not yet possess information, since he is not  yet a member of the PSRC. Some MPs accused him that Buniatyan did not  prepare properly for his speech, which is disrespectful towards the  lawmakers. Some parliamentarians questioned his readiness to defend  the interests of consumers in terms of increasing tariffs for energy  resources due to his work for several years in private companies.

However, Buniatyan himself assured that, within the framework of his  powers, he intends to protect the interests of consumers and, if  elected to the post of PSRC member, be guided exclusively by the law.  "I am in both hands for not increasing energy tariffs, because this  will subsequently negatively affect the country's economy, both for  economic entities and consumers. I am ready to deeply research all  investment programs, give a professional opinion and, within the  framework of my authority, oppose the growth of tariffs, "he said. In  this context, Buniatyan recalled that during his work at Electric  Networks of Armenia CJSC, where he headed the technical unit, he  optimized a number of processes, which, as a result, did not lead to  additional costs, which could affect the increase in tariffs.

However, according to the results of a secret ballot, in which 52 out  of 132 MPs took part, Levon Buniatyan's candidacy was not supported  by the majority of parliamentarians. In particular, only 13 lawmakers  voted "for", 36 "against", 3 ballots were not taken into account.