Canada revoked permits for the export of weapons and technology to  Turkey, after receiving evidence of their use in Karabakh 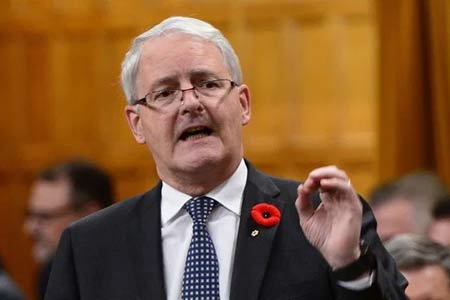 ArmInfo. The Canadian authorities have revoked previously issued permits for the export of Canadian weapons and technology to Turkey, as they received evidence  of their use in the conflict in Nagorno-Karabakh. This was stated on  Monday in a statement by Canadian Foreign Minister Marc Garneau.

The statement recalls that last fall, in accordance with the strict  export control regime, the Government of Canada suspended the  issuance of permits for the export of military goods and technology  to Turkey, pending the results of an investigation into allegations  that Canadian technology was used by Azerbaijan in the military  conflict in Nagorno-Karabakh. At the same time, the minister stressed  that a thorough analysis of all suspended and current export permits  for all military goods and technologies intended for Turkey was  carried out.

"Following the completion of the audit, which found convincing  evidence that Canadian technologies exported to Turkey were used in  Nagorno-Karabakh, I am today announcing the cancellation of the  permits that were suspended in the fall of 2020. Such use is not  consistent with Canada's foreign policy and Turkey's assurances  regarding their end use, " Garneau said.

The minister added that on Monday he discussed the situation with  Turkish Foreign Minister Mevlut Cavusoglu, while stating Canada's  concern about the use of its exported technologies in military  conflicts, which is contrary to the country's laws. He also expressed  the hope that Canada and Turkey, which are NATO countries, will be  able to resolve this issue in the future.

Last fall, The Globe and Mail reported that Azerbaijan could have  used Turkish drones equipped with Canadian military equipment in the  fighting in Nagorno-Karabakh.

After that, Canadian Prime Minister Justin Trudeau said that the  country's authorities have launched an investigation into the  possible use of Canadian military equipment in the conflict in  Karabakh. In this regard, Ottawa suspended all permits for the supply  of weapons to Ankara. Now, after the investigation is completed, all  of them are canceled.