MP: Armenia is moving step by step towards economic, social and  financial collapse 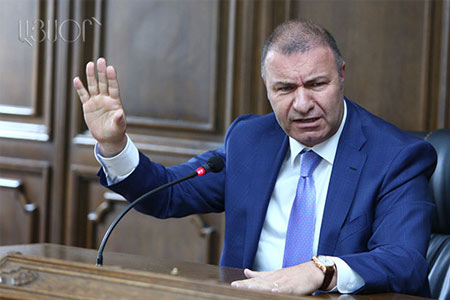 ArmInfo.Armenia is moving step by step towards economic, social and financial collapse. Mikayel Melkumyan, deputy of the RA National Assembly from the Prosperous Armenia opposition faction, stated this at a March 4 briefing.

He noted that today many do not pay serious attention to this issue,  since it is a much more important problem - ensuring the security of  the state. But one of the components of security is economic  security.  When changing power, efforts will be required to get out  of this situation.

In fact, the deputy continued, according to the results of 2020 and  January 2021, there is a double-digit decline in economic activity in  the country. And if in 2020, according to approximate data, it was  -7.5%, and if we add to it the lost 4.5% of growth, then the result  is a figure of about 12% of the decline in GDP.  And if only in March  - May last year the country lost about $ 40 million in GDP daily,  today this figure is $ 5- $ 7 million daily, since everyone is in a  state of expectation. "There is a political crisis, there is a total  crisis, as a result of which business programs are practically not  implemented. People are waiting for what will happen. Even with the  announcement of the date of early elections, businessmen will not  make serious investments until the end of these elections and the  formation of the government. are observed all over the world, "the  oppositionist said. He recalled that Armenia's GDP is about $ 12  billion, and if you calculate the losses for December 2020, January  and February 2021, it will turn out that the country has already lost  10% of its GDP. And when GDP falls, commercial banks begin to assess  their risks. The central bank and commercial banks have solid  analytical capabilities. It is not difficult to notice, the MP  continued, that in 2020 the volume of consumer loans issued in  Armenia has sharply decreased compared to 2018 and 2017.  Today, the  total loan portfolio is approximately $ 8 billion, of which $ 2  billion are consumer loans. A decrease in the volume of consumer  loans indicates a decrease in the income of citizens, which leads to  an increase in the level of poverty. Currently, the country's  commercial banks are looking for creditworthy citizens. And if this  situation continues for several more months, it will be very  difficult to get out of it.  He stated that the country is sliding  into an abyss, as a result of which people become poorer, the dram  has depreciated against the dollar by almost 10%, wages are not  growing, and prices, on the contrary, are increasing. The  oppositionist added that even before the COVID-19 epidemic and in the  pre-war period, the volume of foreign direct investment decreased by  three or even four times. And if it were not for the attracted  Eurobonds of $ 750 million, there would be a problem with payments  over the next 3-4 months of salaries, pensions and benefits. But what  will happen next is not known, it is only known that the country's  national debt has grown from 62% to 72%.

As a result, the economic revolution declared by the authorities  became a failed phenomenon. Mikael Melkumyan stated that one of the  the reasons for this phenomenon is the collapse of the public  administration system. For months, government officials do not give a  go to investment programs, whether it is about building permits,  examinations, changing the status of land, etc. "The current model of  the public administration system practically doesn't work. Even the  issue of creating a" single window "for business does not get its  permission. As a result, everything hangs in the air. Moreover, if  one or another official begins to seriously deal with the issue, the  authorities see it as his interest and initiate criminal proceedings  to identify corruption risks, " - the deputy noted, adding that this  model destroys the foundations of statehood, and against this  background, one should hardly expect serious investments. There is a  crisis that must be resolved, the way out of which may be early  parliamentary elections, but with the definition of the forms and  methods of their holding, on which it is necessary to conduct  discussions.