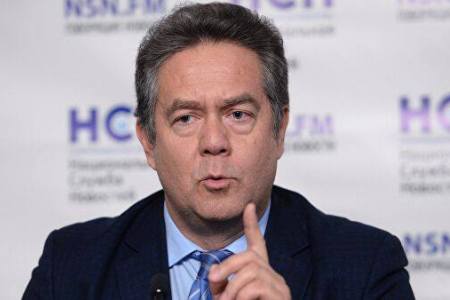 ArmInfo. Armenian Prime Minister Pashinyan is  probably not very versed in military issues. When he talked about the  low efficiency of Russian Iskander missiles, he probably confused  them with Soviet Elbrus missiles. This was stated by the Russian  historian and political scientist, diplomat, head of the Department  of International Relations and Diplomacy of the Moscow Humanitarian  University Nikolai Platoshkin.

According to Platoshkin, it was with these missiles, adopted for  service in the 60s, that the Karabakh army fired at the Azerbaijani  city of Ganja. The "Elbrus" and "Iskander" have only one thing in  common - both are operational-tactical complexes, that is, with a  range of up to 500 km. To some extent, the Iskanders are the sons of  the Elbrus.

"However, no matter what the civilian prime minister elected by the  people speaks, it is not the business of the generals to publicly  criticize him, much less demand his resignation. Just imagine for a  second that some Russian general publicly criticized Putin and  demanded that he leave the Kremlin! Can you imagine that?

Pashinyan does not bear any personal responsibility for the defeat in  the war. His son was at the front. The former corrupt regime of  Kocharyan-Sargsyan (both, by the way, are Karabakh residents) was the  one that during the 20 years in power missed the massive rearmament  of the Azerbaijani army. Moreover, Baku received the most powerful  drones not even from Turkey, but from Israel. And it was known! And  Moscow, an ally of Armenia, could not provide any shock drones to  Yerevan. Because Russia itself simply does not have them.

And Pashinyan agreed to the shameful peace precisely at the request  of his military, in order to avoid the encirclement and prevent  defeat of the entire Armenian army. Now the so-called Armenian  "opposition" wants revenge. But in reality - simply return the  Kocharyan-Sargsyan tandem to power.

And who are the nominal leaders of this opposition, which,  unfortunately, enjoys the tacit support of the Kremlin? These are the  pro-Western politician Vazgen Manukyan and the oligarch Gagik  Tsarukyan (convicted in 1979 in the USSR for gang rape). The latter  supported both the previous regime and Pashinyan and went into  opposition only when, in the summer of 2020, the Armenian  prosecutor's office became interested in tax matters in his business  empire.

The trouble with Pashinyan is that he, like Navalniy'a supporters in  Russia, thought that good, honest and uncorrupted capitalism was  possible. And where is it in Armenia? Where? Well, there is freedom  and that's great! But did it affect the daily life of the Armenians?  Hardly.

There can be only one way out of the current crisis - early  parliamentary elections. They are needed after any lost war. And  Churchill lost the elections in 1945 even after he brilliantly won  the war. He was not afraid to entrust his fate to the people.

Let the people themselves decide the fate of the authorities in the  elections in Armenia! But as long as there is no powerful people's  left party in Armenia, as long as the opposition is represented by  unprincipled oligarchs, or by President Sarkissian, who spent most of  his life after 1991 in London, no good is to be expected.

There is no true freedom without social justice. And while Pashinyan  is an undoubtedly honest person in himself, and other Armenian  politicians does not understand this, fraternal Armenia will simply  have a dreary series of similar prime ministers and presidents.  Without any perspective for the common people.  This is true for  Armenia, this is true for Russia. It's just right!>

To note, the leader of the movement "For New Socialism" Nikolai  Platoshkin is under house arrest. The Investigative Committee opened  a criminal case on the grounds of crimes under Part 1.1 of Art. 212  ("Inducing a person to commit mass riots") and Art. 207.1 ("Public  dissemination of knowingly false information about circumstances  posing a threat to the life and safety of citizens") of the Criminal  Code of the Russian Federation. The department believes that he  disseminated false information about the coronavirus infection. He  denies his guilt.