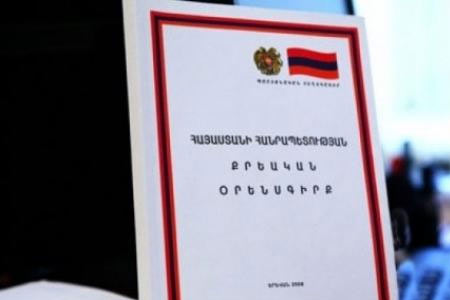 ArmInfo. The RA National Assembly Commission on State and Legal Issues jointly with the UN Development Program "New Armenia - Modern Parliament" held an  extraordinary working discussion on the draft of the new RA Criminal  Code, which has already been adopted by the National Assembly in the  first reading.

Representatives of the Office of the Human Rights Defender, the  Supreme Judicial Council, the National Security Service,  investigative bodies, the police, the Chamber of Lawyers, the  Ministry of Justice, the Prosecutor's Office and other structures  were present in the discussions, as reported by the press service of  the parliament. The Working Group discussed the Code comprehensively  with the participation of competent and interested authorities.  "Until the second reading, work on improving the provisions of the  code will continue," the message says.

Let us remind you that on December 9 the RA National Assembly adopted  the draft of the new Criminal Code in the first reading. in relation  to convicts. It is resocialization (a complex process of  socio-economic, psychological, pedagogical, organizational, medical  measures aimed at the subsequent formation of the convict's ability  and readiness for life in ordinary society conditions, ed.) Is  designated as the ultimate goal of punishment.

Thus, the list of punishments not related to imprisonment has been  expanded. The latter is seen as a last resort. Mechanisms for  applying existing penalties have been improved. For example, the  approach to using public works and fines as such has changed.  Specific mechanisms for establishing punishment in the case of  conciliation proceedings and cooperation agreements have been  determined. The specifics of criminal liability in relation to minors  are clearly defined. In particular, it has been established that  persons under the age of 18 by the time the crime was committed  cannot be sentenced to life in prison. The institutions of release  from serving sentences have been clarified and improved. The  institution of criminal punishment, a system of punishment for legal  entities has been established. For the work done, Badasyan thanked  the Council of Europe and the working group that developed the  project.