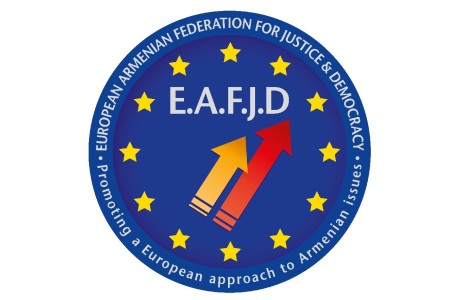 ArmInfo.The statement issued at the end of the meeting between Vladimir Putin, Ilham Aliyev and Nikol Pashinyan in Moscow on January 11 ignores the needs of the Armenian side and deepens the uncertainly concerning its security, this is  stated in the statement issued by the European Armenian Federation  for Justice and Democracy.

The European Armenian Federation for Justice and Democracy (EAFJD) expresses its deepest concerns over the outcome of this tripartite meeting which failed to achieve any  progress regarding paragraph 8 of the ceasefire document of 9.  November 2020 i.e. the release of the Armenian Prisoners of war (POW)  and hostages. Despite this, the Armenian side agreed on the  implementation of paragraph 9 of the same document.  This is all the  more disappointing since prior to the meeting the Armenian Prime  Minister Nikol Pashinyan had publicly announced that the issue of  POWs was a priority for the Armenian government and that without  significant progress in this field it would be extremely difficult to  discuss any economic agenda.

Nevertheless, the Armenian Prime Minister signed the statement,  stipulating the creation of a new transport link  Turkey-Nakhichevan-Azerbaijan through the Armenian territory, thus  opening the door to the implementation of Erdogan's pan-Turkic  Ottoman agenda.

In "exchange" Armenia, which already has access to Russia via Georgia  and a direct, open border with Iran, receives an imposed commercial  route to these two countries with the railway links via Azerbaijan.  Considering the state driven Armenophobia in Azerbaijan targeting  even Armenian children, the cruel war crimes committed by the  Azerbaijani military against the Armenians only 2 months ago, the  ongoing torture and abuse of the Armenian prisoners of war as well as  the hostile rhetoric of the Azerbaijani authorities, imposing a  commercial route at this stage raises numerous questions in terms of  broader security and sovereignty of Armenia.  Armenia seems to be the  only party to the conflict which not only fulfills but overfulfills  its obligations, stipulated by ceasefire document signed on 9.  November 2020. Thus:

the first paragraph of the above-mentioned document states that the  parties "shall stay at the positions they occupy". Nevertheless, a  few Armenian towns and villages in Nagorno Karabakh were ceded to  Azerbaijan although the Azerbaijani armed forces had failed to take  control of them during the war.

A hasty, unsubstantiated, and highly dangerous demarcation process  started between the Republic of Amenia and Azerbaijan, endangering  key infrastructure (such as an airport in the city of Kapan),  resulting in a significant loss of property of Armenian villagers and  creating existential safety concerns of the bordering settlements of  the Republic of Armenia.

In the meantime, Azerbaijan has been refusing to fulfill its only  obligation of releasing all the Armenian POWs, hostages and  detainees. Instead, the Azerbaijani authorities have been abusing  this humanitarian issue to elicit new gains and cause further  physical and psychologically suffering. The Azerbaijani sources have  been posting videos of humiliating Armenian hostages, including  helpless elderly people. Several videos of desecration of Armenian  cultural monuments have also emerged.  Commenting on the statement of  11. January, the EAFJD President Kaspar Karampetian stated: "This  declaration is unfortunately new failure for the Armenian side to  defend its basic security, humanitarian needs and achieve the  fulfillment an important requirement of the statement of 9. Nov.   2020, namely the return of the hostages. As a matter of fact, The  Armenian side signed a new document despite not having achieved the  fulfillment of its only urgent and crucial requirement.

Considering the current circumstances, the unresolved security  concerns, the strong Armenophobia in Azerbaijan and the pan- Turkic  aspirations of Erdogan's Turkey, the reached arrangement creates  major security concerns for the South of Armenia and for country's  sovereignty overall." Regarding the issue of the return of the  prisoners of war Karampetian said: "We were expecting Russia to play   its role as a just mediator and put more pressure on Azerbaijan so  that the latter fulfills its obligation of returning the POWs and  hostages. It is disappointing that there were no tangible results in  this sense. The other two Co-chairs of the OSCE Minsk group, the  European Union and the international human rights organizations must  also intervene, to stop the torture and abuse of the Armenian  hostages by the Azerbaijani authorities and ensure their return.''