Russian government presented its version of the Pashinyan-Mishustin  conversation: Karabakh was the main topic 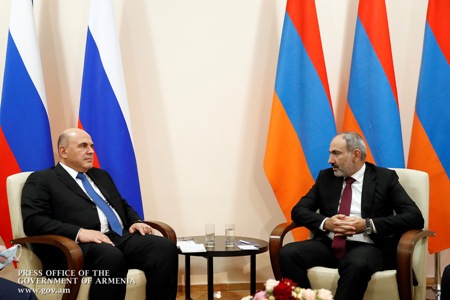 ArmInfo.The prospects for the development of Russian- Armenian trade and economic cooperation were discussed during a telephone conversation by Russian Prime  Minister Mikhail Mishustin and Armenian Prime Minister Nikol  Pashinyan.

According to the press service of the Russian government, special  attention was paid to Russia's participation in the post-conflict  reconstruction of Nagorno-Karabakh, including the solution of the  problem of refugees and transport links in the region.

Mikhail Mishustin and Nikol Pashinyan also touched upon the topic of  joint work within the framework of the Eurasian Economic Union.