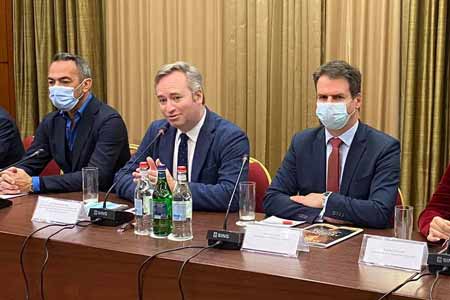 ArmInfo. From the very beginning of the aggravation of the situation in the zone of the  Nagorno-Karabakh conflict, France took an active part, together with  other co- chairs of the OSCE Minsk Group, in efforts to achieve a  ceasefire Jean-Baptiste Lemoyne, Secretary of State to the Minister  for Europe and Foreign Affairs of France stated this on November 28  during a briefing in Yerevan.

He recalled that the co-chair countries made three unsuccessful  attempts to establish a ceasefire between the parties, then, on  November 9, a trilateral agreement was signed by the leaders of  Armenia, Azerbaijan and Russia. "The document signed on November 9,  consisting of 9 points, does not contain a number of provisions, for  example, the issue of ensuring security and long-term peace, the  status of Nagorno- Karabakh, the withdrawal of Syrian mercenaries  from the Middle East. In this regard, we are convinced that the  discussion of these issues should be continued in within the OSCE  Minsk Group. Both Armenia and Azerbaijan agreed to continue  negotiations within the OSCE Minsk Group," Lemoyne said, recalling  that French President Emmanuel Macron was one of the first calling  things by their proper names in connection with the situation in the  Karabakh conflict zone, informing about the transfer of mercenaries  by Turkey to the conflict zone to participate in the battles.   According to the French diplomat, Paris expects Ankara to withdraw  these mercenaries from the conflict zone, and also hopes that  European partners will support the introduction of sanctions against  Turkey.

When asked if he had the impression that Russia bypassed its OSCE  Minsk Group partners and reached an agreement with Turkey, the French  Foreign Minister reiterated that the statement did not contain  certain points and that the participation of all OSCE MG co-chairs in  the continuation of negotiations was necessary.

To note, after Azerbaijan's large-scale military aggression against  Artsakh, a number of media outlets wrote about hundreds of Syrian  militants associated with Turkey deployed to Karabakh and about the  readiness to send "hundreds more" of militias to the Karabakh  conflict zone.

Syrian leader Bashar al-Assad said that fighters from Syria are being  deployed to Karabakh, and Turkey is using terrorists from Syria and  other countries in Nagorno-Karabakh. In turn, the director of the  Foreign Intelligence Service of the Russian Federation, Sergey  Naryshkin, also reported that, according to the information available  to the Service, mercenaries from international terrorist  organizations fighting in the Middle East are actively transferring  into the conflict zone, and we are talking about hundreds and even  thousands of radicals.

French President Emmanuel Macron also spoke about the transfer of 300  Syrian militants across Turkey to Baku in early October. The leaders  of Azerbaijan and Turkey, despite providing numerous factual evidence  of their involvement in the hostilities, denied their involvement.   And the Russian Foreign Minister noted that the number of militants  participating in the conflict is in the thousands.