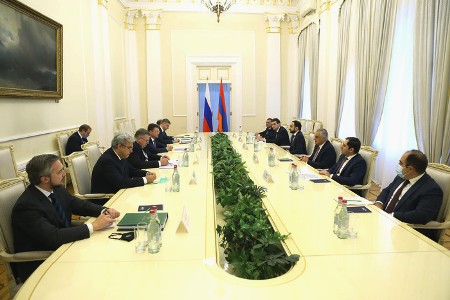 ArmInfo. Deputy Prime  Ministers of Armenia Mher Grigoryan and Tigran Avinyan received  members of the Russian government delegation, vice-chairmen of the  Russian Federation Alexey Overchuk and Alexey Novak, who arrived in  Yerevan on a working visit.

As reported by the press service of the RA government, Minister of  Territorial Administration and Infrastructure of Armenia Suren  Papikyan also took part in the meeting.

The Armenian side thanked the Russian government for its efforts to  establish a ceasefire regime, as well as active participation in  measures aimed at countering and neutralizing the current  humanitarian catastrophe in Artsakh.

The parties discussed in detail the program aimed at restoring normal  life in Artsakh and organizing the safe and dignified return of  internally displaced persons.  The meeting participants discussed a  number of issues related to transport, energy and business.