Anna Naghdalyan: By violating humanitarian law in the grossest way,  Azerbaijan assumes the short-term and long-term consequences of all  its actions. 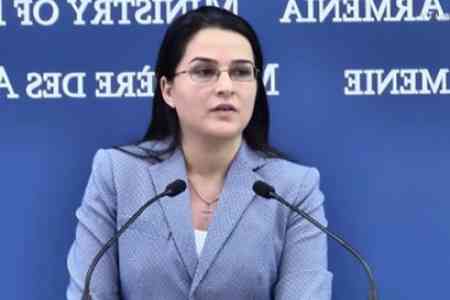 ArmInfo. The goal of Azerbaijan is to exterminate the indigenous population of Artsakh, and its stay on the territory of Artsakh will be impossible under the  jurisdiction of Azerbaijan. Anna Naghdalyan, press secretary of the  Ministry of Foreign Affairs of the Republic of Armenia, stated this  during a briefing on October 29, answering the request of the ArmInfo  correspondent to comment on "the peaceful maxims of President  Aliyev".

She noted that all actions of Azerbaijan were accompanied by a gross  violation of the rules of war and humanitarian law. So, to Ilham  Aliyev's statement that Karabakh will become a peaceful region and  one of the most prosperous after the elimination of the consequences  of the war, Anna Naghdalyan replied: "Their actions are much more  eloquent than Aliyev's words. This is to exterminate the population,  to destroy medical facilities in a pandemic, to fire cluster types of  weapons prohibited by international standards. This only suggests  that the main goal of Baku is to inflict the greatest damage on the  civilian population - women and children who are far from the place  of hostilities>.

In the same vein, the official representative of the Armenian Foreign  Ministry recalled the videos published on the network, where war  crimes were committed against Armenian prisoners of war, which, by  the way, were praised by the Azerbaijani population. "They are  completely destroying all the settlements that are under their  control in order to prevent the return of the indigenous population  to their places of residence," she stressed.

Summarizing what was said, Naghdalyan noted that the introduction of  hostilities against the civilian population distinguishes a normal  state from terrorist organizations. "By violating humanitarian law in  the grossest way, encouraging such manifestations, making them a  source of pride, Azerbaijan assumes the short-term and long-term  consequences of all these actions," the Foreign Ministry speaker  concluded.