In Yerevan, in front of the German Embassy in Armenia, an action is  being held demanding the recognition of Artsakh 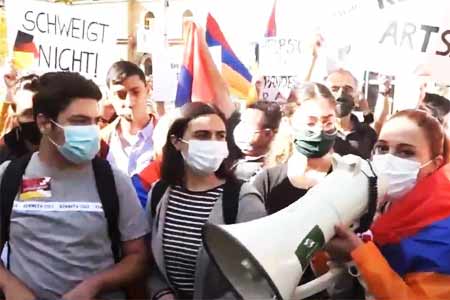 ArmInfo. In Yerevan, in front of the German Embassy in Armenia, an action is being held, the participants of which demand that the German government recognize the  independence of the Republic of Artsakh. An ArmInfo correspondent  reports this from the scene.

According to the protesters, the best solution to the Artsakh  conflict is the recognition of the independence of the NKR. There is  also a demand for Germany to influence Ankara and Baku by applying  sanctions against them.

The protesters said that they have already roughly understood the  position of Germany and intend to do everything to change it. The  protesters stressed that they plan to meet with the ambassador. The  protesters unfurled posters that read: "Artsakh is Armenia",  "Recognize Artsakh", "No Genocide" and "No Holocaust".