Naira Zohrabyan stated that in near future, criminal cases may be  initiated against her and MP from PAP Gevorg Petrosyan 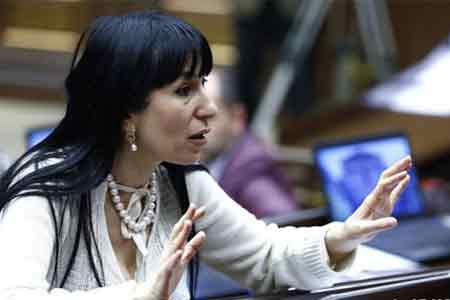 ArmInfo.MP from the Prosperous Armenia faction Naira Zohrabyan told reporters that she suspects that a criminal case will be opened against her in the near future.

Zohrabyan also stated that it is possible that a criminal case will  also be instituted against another MP from the PAP Gevorg Petrosyan.  <This may be followed by our arrests. My telephone conversations have  been wiretapped for a long time, moreover, I learned from reliable  sources that a recording will soon be published in which I allegedly  offend the citizens of the country," the MP noted.

She stressed that on the instructions of the Prime Minister of  Armenia, the plenipotentiary bodies are looking for people who are  ready to testify against her and Petrosyan. According to Zohrabyan,  they intend to accuse them of bribery of voters.

"I have never tried to bribe voters, but you can expect anything from  the current authorities. Thus, the authorities are trying to silence  us, but this will not happen. I am not afraid of anyone, I am not  afraid of arrest, and I do not intend to follow someone's lead. I  have already warned my family members about the edited videos and  possible ordered articles>,  the MP stressed.

Zohrabyan also added that when Prime Minister Nikol Pashinyan, being  an oppositionist, criticized the authorities, such illegal actions  were not carried out against him, and there were no attempts to get  into his family and personal life. According to the MP, the  representatives of the new government have no moral guidelines.