Assistance to families with children enters into force in Armenia 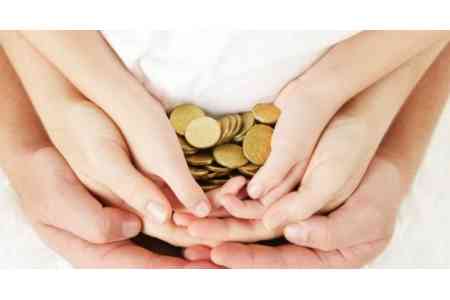 ArmInfo.  For people living in  rural areas, an allowance for a child under two years of age will be  established. Deputy Minister of Labor and Social Affairs of Armenia  Smbat Saiyan announced this at a press conference on June 29.

As noted, the allowance will be provided regardless of whether the  parents work or not. According to Sahiyan, the measure is aimed at  improving the demographic situation in the country. According to  preliminary estimates, about 7 thousand beneficiaries will be able to  use the program. A mandatory requirement is that the parents and the  child are registered in rural areas.

The program for the payment of benefits to this category of citizens  will come into force on July 1 of the current year, while the amount  of the benefit will be 26.5 thousand drams. In addition, from the  same day, the current amount of childcare allowance will also  increase, amounting to 26.5 thousand drams. Thus, parents living in  rural areas will be able to claim both benefits at the same time. By  the end of the year, 450 million drams will be allocated for the  payment of child benefits.

Saiyan noted that from July 1, one-time payments for the birth of the  first and second child will also increase - from the current 50  thousand drams and 150 thousand drams to 300 thousand drams. In  addition, from the same day, a program of monetary assistance starts  for families with children who intend to purchase housing in the  regions. Financial assistance to families with two minor children  will amount to 5% of the price of the apartment, but not more than  one million drams. The second program is aimed at prepaid insurance  when buying a home, and the third - at partial repayment of the  principal amount of a mortgage loan at birth after July 1. <In  particular, in the regional settlements, if it is the first or second  child, then state support will amount to 10% of the mortgage loan,  and in Yerevan - 5%. If a third and next child is born in a family,  then the amount of payments in the regional settlements will be 50%,  in Yerevan - 25%>, the deputy minister said. According to him, in the  near future other assistance programs will also be implemented,  including in the form of housing construction in the regions.