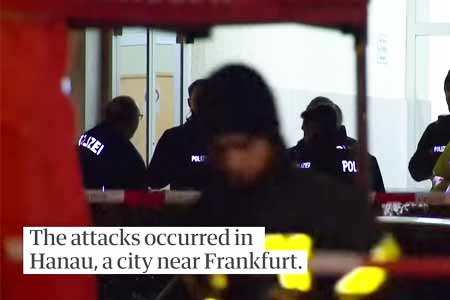 ArmInfo. Prime Minister of Armenia Nikol Pashinyan sent a letter of condolences to Chancellor of the Federal Republic of Germany Angela Merkel in connection with the  tragic incident in Hanau town. This was reported by the press service  of the Prime Minister.

The message, in particular, reads: "it was  with deep grief that I learned about the tragedy in Hanau town. On  behalf of the Armenian people and personally me I offer condolences  and solidarity with you and the friendly people of Germany. I wish  patience and spiritual strength to the relatives and friends of the  victims, and speedy recovery to the injured".

To note in the German Hanau town, an unknown man attacked a hookah  and a bookmaker. As a result of the attack, nine people were killed,  several more were seriously injured.

Soon, police found the body of the alleged attacker. He was found  dead at his home address in Hanau. The police also found another body  there. The investigation is ongoing.