German Chancellor: We must carry out long work to achieve progress in  Armenian-Azerbaijani relations 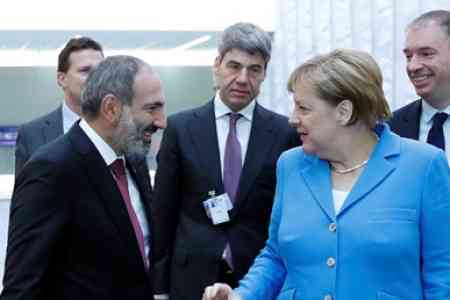 ArmInfo. "I am pleased to once again welcome the Prime Minister of the Republic of Armenia, Nikol Pashinyan, to Germany. We had the opportunity to meet, and  since then the relations between our countries have become more  intense. Today we will talk about deepening our bilateral relations,"  said German Chancellor Angela Merkel after the ceremony of meeting  the Prime Minister of Armenia.

As the press service of the Government of Armenia, Angela Merkel  noted that serious changes are underway in Armenia.

"Big changes are also expected in the legal system. It's not  easyprocess, but we wish Armenia success in these steps. As i already  said our relationship has intensified. When i visited Armenia, I  visited the Tumo center and was very impressed with it institution.  We signed an agreement to open a branch of the Tumo center, and we  will be able to open it in Berlin this fall, "said the German  Chancellor.

She also recalled that in October last year an economic forum was  held, and he opened a new page in German-Armenian relations. "We  express our gratitude for the active cooperation of Armenia with us  within the framework of the peacekeeping mission in Afghanistan.  Armenia has signed an agreement with the European Union, at the same  time it is a member of the Eurasian Economic Union, and we still have  to work hard to establish cooperation between the two unions. One of  the important issues of today's discussion is the settlement of the  Nagorno-Karabakh conflict.We must carry out long work to achieve  progress in the Armenian-Azerbaijani relations. "The Prime Minister  will continue his trip to Munich. We are grateful and glad that you  are here today." - said Angela Merkel.