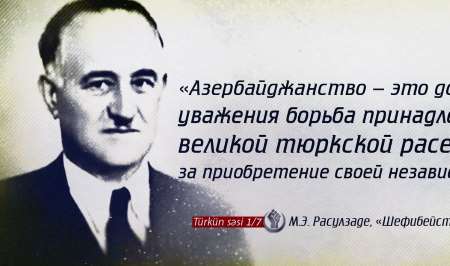 The publication is a facsimile of the book in Russian, published in  1930 in Paris by the Caucasus Independence Committee, as well as its  translation into Azerbaijani with notes and comments. Central to the  collection is a large article by Rasulzadeh entitled "Under Russia's  Slavery ".

Being a hater of all of Russian and Soviet Russia, extreme  nationalist Mammad Emin Rasulzadeh, as is already known, joined the  German National Socialists in the 1930s, and then in the first months  after the Nazi attack on the USSR became a key figure in the  formation of the Azerbaijani Wehrmacht legion.  Rasulzadeh was an  apologist for pan-Turkism and considered this movement to unite the  Turkic peoples as a force capable, together with German fascism, of  destroying Russia as the main enemy of Turkey, which was sympathetic  to fascist Germany and restoring the independence of Azerbaijan.  Christian Armenia for Rasulzadeh was a country that really impeded  the realization of its geopolitical aspirations.