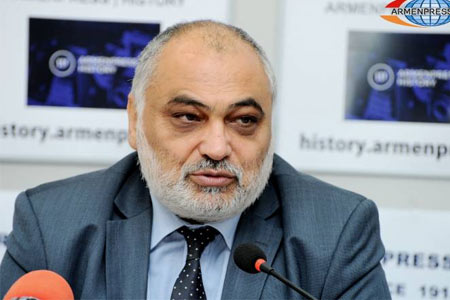 ArmInfo. Today, Armenia is of certain interest to China in a number of sectors. Director of the Institute of Oriental Studies of the National Academy of Sciences of  Armenia, Academician Ruben Safrastyan expressed this opinion to  ArmInfo.

"Firstly, China's strategy to recreate the Great Silk Road should be  taken into account. Armenia is on this road. In this light, Beijing's  strategic interest in the possible use of the territory of Armenia to  access the Black Sea through the countries of Central Asia, Iran and  Georgia is evident. This is one of the routes of the Great Silk Road  and China is striving to make Armenia a part of this large-scale  project. It's not without reason that, as far as I understand, the  Chinese are building roads in Armenia quite intensively today, " he  said.

On the other hand, in addition to economic interest, Armenia,  according to the academician, is of civilizational interest for  China. Following the results of numerous meetings in China with  senior management, academia, various sectors of society, the  orientalist notes that the Chinese have an interest in Armenia as one  of the oldest world civilizations.

"And this dialogue of ancient civilizations for the Chinese matters  as for representatives of ancient civilization. Armenia is a small  country compared to China, but the Chinese, unlike the Americans,  attach importance to the civilizational dialogue. And, based on my  personal experience, the director of the Institute Oriental studies,  I should note a noticeable increase in the interest of Chinese  colleagues in cooperation with our institute, "he said.

Safrastyan estimates the scientific relations of the Institute of  Oriental Studies with Chinese with colleagues from significant,  rather important research centers under the government, the Ministry  of Foreign Affairs, and the Institute in the system of the Chinese  Academy of Social Sciences as very good and established.  According  to him, Armenian and Chinese scientists often visit each other, there  is an intensive exchange of views on the situation in the Middle  East, the South Caucasus region, and in the world as a whole.

"Of course, the interest of Chinese scientific circles in our  institute is largely explained by the fact that China has very few  specialists in the Middle East. The Chinese are well aware that our  institute is traditionally a fairly strong center of oriental  studies. That is why they are very interested in our assessments.  China proceeding from the significance of the Middle East, conducts  quite an active policy in the region today. And the Chinese are  interested in our assessment of the situation in the region where  Armenians have lived for millennia, "he stressed.

In this light, the orientalist emphasized the fact of the formation  of a very strong Turkic school at the Institute of Oriental Studies  for many years. According to him, the study of the politics of modern  Turkey, in particular, in the Middle East, at the Institute is at a  high level. According to his estimates China is quite interested in  the Middle East policy of Turkey, which has been quite unpredictable  and adventurous recently.