Nikol Pashinyan: I am the first Armenian leader who stated that any  solution to the Nagorno-Karabakh conflict should be acceptable for  the Azerbaijani people 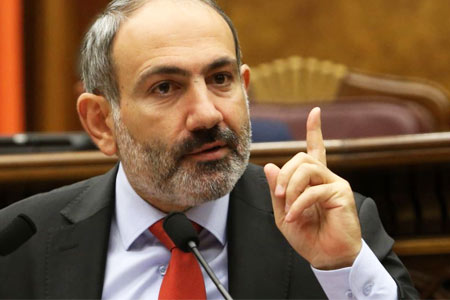 ArmInfo. Armenian Prime Minister Nikol Pashinyan participated in the discussion in the format of a master class as part of the Second Paris Peace Forum. The  discussion was led by Stephen Erlanger, New York Times chief  diplomatic correspondent for Europe.

Introducing the Prime Minister,  Stephen Erlanger noted that Nikol Pashinyan is an interesting person,  and he has a special attitude to the head of the Armenian government,  because he is a former journalist, has been in prison several times  and has become Prime Minister of his country. "This is a very unusual  way. I am a former Moscow correspondent, I was in your country. I  want to thank you for being here," Erlanger said.  According to the  press service of the head of the Armenian government, in his speech,  the Prime Minister thanked French President Emmanuel Macron for such  an important initiative and noted that this is an important platform  for discussing modern security challenges and developing joint  formulas to overcome them.

"What do you need to know about the security situation in our  country? I must note a very strange fact: two of our four borders are  closed, the other two are half closed, so to speak. Why are they  half-closed?  Because we have a border with Iran in the south, and as  you know, there is some tension around Iran, our northern border with  Georgia, and tensions between Georgia and Russia have some negative  impact, "said Nikol Pashinyan.

But, of course, as the prime minister  pointed out, the most important security challenge for Armenia is the  problem of Nagorno-Karabakh. Having become the Prime Minister of  Armenia and starting to take part in international relations, he  said, he was surprised to find that there are a number of  misunderstandings in the international community regarding the  Nagorno-Karabakh problem.  According to Pashinyan, anyone who is  interested in the Nagorno-Karabakh issue should know the reason for  this conflict. "First of all, the reason was the decision of the  Stalin regime to transfer Karabakh to the newly formed Soviet  Azerbaijan. When Mikhail Gorbachev became the leader of the Soviet  Union in 1986, he began the process of democratic reforms and  announced the beginning of perestroika. The vast majority of the  Karabakh population was and remains Armenian, and they had the status  autonomous region within Soviet Azerbaijan. The population of  Nagorno-Karabakh decided to seize this opportunity and withdraw from  Azerbaijan in accordance with the legislation of the USSR "he  reminded.

"The authorities of Soviet Azerbaijan decided to suppress  this movement with the help of leverage - the police, etc. This is  how the very first stage of this conflict was formed. Then, when the  collapse of the USSR began, Azerbaijan, like many other Soviet  republics, decided to become an independent state. And the law The  USSR said that if a republic-member of the Union decides to become  independent, then the autonomous region that is part of it will  determine its future.

What does this mean? Only one thing: unfortunately, the  Azerbaijani authorities are not going to talk with these people and  negotiate with them, because they they are territories, not people.  More precisely, they need territories without people, "said  Pashinyan.  According to the RA Prime Minister, the policy of  Armenian-phobia extends further. Foreigners visiting Nagorno-Karabakh  are on the black list of Azerbaijan. A citizen of any country that  has an Armenian surname or is of Armenian descent cannot enter  Azerbaijan. This was the case with a US citizen, a Bloomberg  journalist, a Turkish orchestra musician, an eight-year-old child,  and an eighty-year-old Russian pensioner. "Recently, the driver was  arrested only for listening to Armenian music in the car," Pashinyan  recalled.

"The most notorious incident occurred with Arsenal player  Heinrich Mkhitaryan, who missed the final match of the Europa League  in Baku just a few months ago. Azerbaijani authorities even banned  T-shirts with the name of Mkhitaryan, and people passing by in such  shirts on the streets of Baku were detained by police. What will  happen next? "the prime minister asked.  According to Pashinyan, it  is obvious that real efforts are needed to solve the problem. "We  have, so to speak, equal opportunities with the leaders of  Azerbaijan, the leaders of Nagorno-Karabakh to solve the problem," he  said.  Pashinyan recalled that at the very beginning of his tenure,  he stated that any solution to the Nagorno- Karabakh conflict should  be acceptable to the peoples of Azerbaijan, Nagorno-Karabakh and  Armenia. "I am the first Armenian leader who stated that any solution  to the Nagorno-Karabakh conflict should be acceptable for the  Azerbaijani people. And the opposition of our country asks why  Armenia should take care of the interests of the people of  Azerbaijan.

My answer is very simple: because I am convinced that if  we want to find a stable solution to this problem, we must take into  account the interests of all parties involved. I made this statement  in the hope that we will hear a similar statement from the leadership  of Azerbaijan, from my colleague Ilham Aliyev. If we heard a similar  statement from Mr. Aliyev, this would be a real breakthrough in the  negotiation process. From this very important platform (Paris Peace  Forum), I want to urge our partners to make such a statement that the  solution of the problem should be acceptable to the peoples of  Azerbaijan, Nagorno-Karabakh and the Republic of Armenia.