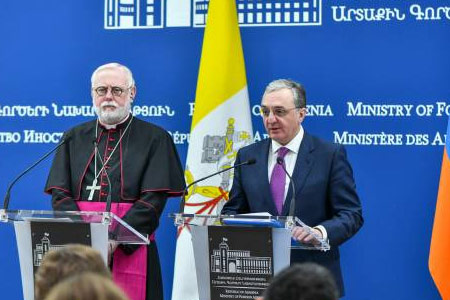 ArmInfo."Official Yerevan and the Armenian people are grateful for the principled and unanimous message of the Pope of Rome to the recognition of the Armenian  Genocide," said Armenian Foreign Minister Zohrab Mnatsakanyan at a  press conference following a meeting with Archbishop Paul Richard  Gallagher, the Secretary for Relations with States within the Holy  See's Secretariat of State.

As the head of the Armenian Foreign Ministry pointed out, the visit  of the High Representative of the Vatican is another step towards the  development of relations between Armenia and the Holy See.

"Archbishop Gallagher has a great contribution to deepening both the  interstate relations between the Republic of Armenia and the Vatican,  and, in general, in international relations," Mnatsakyan stated.

According to him, although relations between Armenia and the Holy See  have a centuries-old history, they were given a new round after  Armenia gained independence.

As the head of the Armenian Foreign Ministry emphasized, in the early  1990's, the Pope of Rome, now St.  John Paul, donated to the Ashotsk  district the  ''Tiramayr Narek'' charity hospital, which operates to  date and provides free services.

According to Mnatsakanyan, the Armenian people warmly recalls the  visit of the Roman Pontiff John Paul II to Armenia in connection with  the celebration of the 1700th anniversary of the proclamation of  Christianity as the state religion.  One of the significant events in  the bilateral relations was the assignment of the title of  Archimandrite of the Ecumenical Church to the Armenian saint Gregory  Narekatsi by Pope Francis, and then in 2018 the grand opening of the  Narekatsi monument in the Vatican.  "I want to note that the high  level of bilateral relations is the result of personal interest of  His Holiness, for which we are grateful," he said, stressing also the  interest of the Armenian side in deepening relations. As Mnatsakanyan  noted, during the meeting with the representative of the Vatican,  contemporary challenges were addressed at the regional and  international levels, issues of protecting the interests of religious  minorities, Christians, and ensuring the preservation of the  historical and cultural heritage of Christianity in the Middle East.  The head of the Armenian Foreign Ministry presented the processes  surrounding the peaceful settlement of the Karabakh conflict and the  principled position of Armenia on the issue.  Zohrab Mnatsakanyan  also stated that the that official Yerevan and the Armenian people  are grateful for the principled and unanimous message of the Pope of  Rome to the recognition of the Armenian Genocide."The unconditional  condemnation of this crime is important not only from the point of  view of truth and historical justice, but also is a great  contribution to the prevention of such crimes in the future and the  achievement of agreement between states," he said.  The RA Foreign  Minister also spoke about the internal agenda of Armenia and the work  of the government aimed at reform.