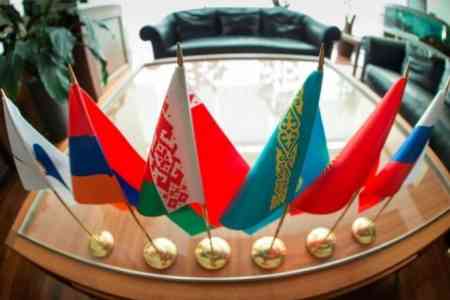 ArmInfo. On November 6, a meeting of the Armenian-Russian interparliamentary commission was held in Gyumri.  In particular, Ambassador of Armenia to the Russian  Federation Vardan Toghanyan,  Ambassador of Russia to the RA Sergey Kopyrkin, Deputy Head of the Federation Council Yuri Vorobyov, the  Vice- Speaker of the Armenian Parliament Alen Simonyan took part in  the meeting.

During the event, questions were raised of the development of  relations in the context of the Eurasian Economic Union, the creation  of a common energy market, as well as the harmonization of national  legislations within the EAEU.  The meeting participants expressed  satisfaction with the current level of development of the Armenian-  Russian relations, including in the political and economic spheres.  In particular, Vorobyov noted the significant contribution of Armenia  to the strengthening of the EAEU, pointing out with satisfaction the  strength of the position of the Russian language in the republic.

According to him, cooperation between the two countries is carried  out in all areas of mutual interest.  Pointing to the absence of  obstacles in trade and economic relations, Vorobyov noted that during  the period of the Armenian presidency in the EAEU, a number of  important steps were taken towards strengthening this organization.

For his part, Simonyan, noting the impressive level of military  assistance rendered by Armenia to Russia, pointed out that relations  between the two countries are based on friendship and mutual respect.  As was emphasized, there is a high level of political and  humanitarian dialogue, and the holding of such meetings can give a  new impetus to inter-parliamentary cooperation.