Laurent Vauquier: France, it seems to me, should already work towards  the adoption of a law criminalizing the denial of the Armenian  Genocide 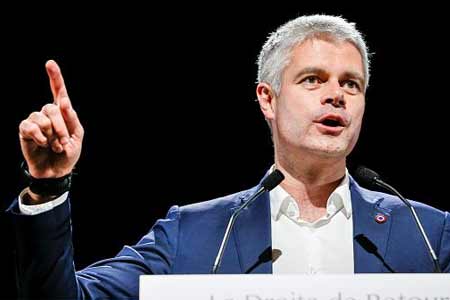 ArmInfo.Even if an Armenian smiles, tears always lurk behind his smile. The president of the Auvergne-Rhone-Alpes region Laurent Vauquier stated this at a  reception in honor of the visit of the French delegation to Armenia.

"I like one expression, which says that when an Armenian makes a  decision, he clearly knows where he is going and why, and what is his  ultimate goal. Everything I've heard and seen about the Armenians and  Armenia has led me to make every decision to stimulate  Armenian-French contacts in our region. This was followed by my  decision to visit Yerevan, "he said, adding that their delegation was  in Armenia for the first time, and this visit is an imperative of the  day.

Vokye also shared his impressions of visiting the Tsitsernakaberd  memorial complex for the victims of the Armenian Genocide: "I  arrived, and what really touched me: this is how to restrain myself  when my heart trembles, at the moment when you were in the memorial  complex of the victims of the Genocide, where music that, as it were,  winds up the torment that went through, subjected to tsegaspanutyun  (genocide).  When we were in the museum of genocide, one of the  members of my delegation whispered in my ear that he could not stand  it anymore, it was above him silt, and it is better if he left.  That's when I understood the meaning of the winged phrase "even if  the Armenian smiles his smile hides the tears." I regret the fact  that in France do not yet know all of the genocide. " At the same  time, he announced the initiative of providing all lyceums and  schools in the region with books telling about the Armenian Genocide.

At the same time, he expressed bewilderment by the fact why Turkey  has still not recognized the Armenian Genocide, expressing the  conviction that Ankara should follow the example of Germany. "And  France, as it seems to me, should already work towards the adoption  of a law criminalizing the denial of the Armenian Genocide," Vauquier  summed up.