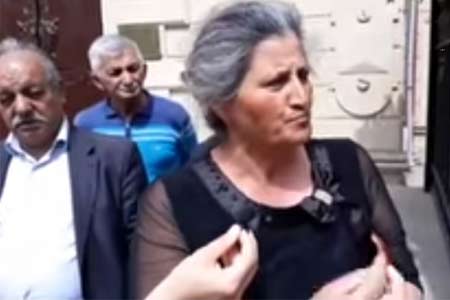 ArmInfo.Relatives of the killed and arrested soldiers in the "Terter case" held a protest  rally in front of the military unit of the Ministry of Defense in the city of Barda today.

As Turan reports, protesters dressed in shirts with images of those  killed and arrested. The protesters demanded the rehabilitation of  the dead, a review of their cases and the release of the convicts. "I  am raising two future soldiers, what will I tell them? They already  say that they themselves will find the murderers of their father. We  demand a fair investigation," said one of the protesters.

Participants consider guilty of the death of their loved ones the  unit commander Hikmet Hasanov. The demonstrators demanded the removal  of all guilty officials from office and criminal prosecution.  An  officer came out to the protesters, promising that they would be  received by the unit commander. However, protesters said they did not  believe these promises.

To recall, on May 7, 2017, the Prosecutor General"s Office, the State  Security Service, the Ministry of Defense and the Ministry of  Internal Affairs of Azerbaijan issued a joint statement, announcing  that the detained group of military personnel and civilians were  guilty of espionage in favor of Armenia. On May 3, the military  prosecutor's office of Azerbaijan filed a lawsuit under the Article  274 (high treason) of the Criminal Code. A joint investigation team  was created from among the employees of the above-mentioned law  enforcement agencies.