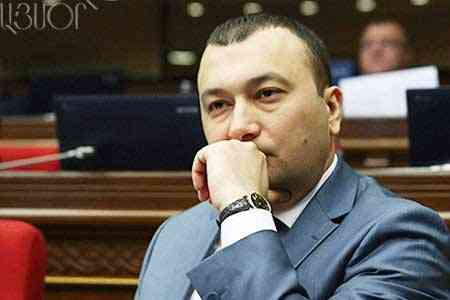 ArmInfo. During the meeting of  the Parliamentary Assembly of the Black Sea Economic Cooperation in  Turkey, the Armenian delegation once again encountered Azerbaijan's  attempts to politicize this site. Vice-Speaker of the National  Assembly of Armenia, Vahe Enfiajyan, announced this at a press  conference on September 23.

"There are a number of countries in the PABSEC that also have  territorial problems, including Georgia, Ukraine, and Moldova, which  sometimes raise such issues themselves. And therefore, since raising  these issues is based on their interests, they turn a blind eye to  such statements by Azerbaijan,"  Enfiajyan emphasized.

"In turn, I also made a statement in which I noted that the PABSEC is  an economic, not a political Assembly. Moreover, I stated that if a  delegation does not participate in discussions, it is unacceptable to  discuss issues concerning it. (Armenian delegation did not go to the  last PABSEC meeting in Baku - Ed.  note). As a result, we had a  dispute and everything possible was done to prevent the Armenian  delegation from expressing its point of view, but we stated that we  would not ignore the attacks carried out against us, " Enfiajyan  emphasized.

The Vice-Speaker noted that in his speech he spoke about the  elections held in the NKR, emphasizing that they were held in  accordance with all the norms of democracy. According to the MP, his  statement caused dissatisfaction of the Azerbaijani delegation.

"Representatives of the Azerbaijani delegation said that" at present,  20% of the territory of Azerbaijan is under occupation. "To which I  replied that Artsakh was never part of independent Azerbaijan. I also  had to make a remark to the PABSEC Secretary General Asaf Hajiyev,  who is Azerbaijani and tried to defend the interests of Baku. It is  worth noting that no one except the Turkish delegation intervened.  The Turkish delegation, in turn, did not hide that it supports the  interests of Azerbaijan, "the Vice-Speaker emphasized.

It should be noted that on September 18 in the Turkish city of  Giresun the 53rd meeting of the PABSEC Committee on Economic, Trade,  Technological and Environmental Issues was held.