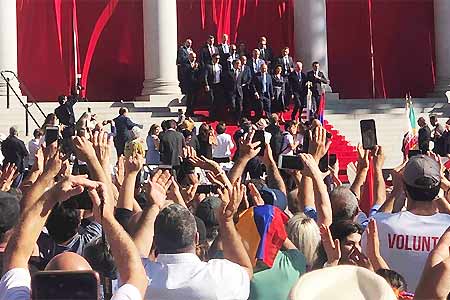 ArmInfo. As part of a working visit to the United States, Prime Minister Nikol Pashinyan met in Los Angeles with the leadership of the Armenian Liberal Democratic Party (Ramkavar Azatakan) of the West Coast of America, led by the party's  chairman, Dr. Raffi Balyan.  According to the Prime Minister's press  service, the head of the Armenian government noted that the meeting  is a very good reason to meet in Los Angeles and discuss everything.

"Of course, today we have several reasons for meetings and  discussions. We highly appreciate the role of your organization in  preserving the Armenians both in the Republic of Armenia and abroad.  We emphasize this during meetings with our other partners. One of the  most important tasks Our government's goal is not only to maintain  and develop the positive background that exists between the Armenian  government and the diaspora, but also to make it permanent and  traditional for all Armenian governments. Today our task is to  generate, double, morning success and turn it into a national,  national result.To this, it is very important to create the right  atmosphere in relations with the diaspora, working mechanisms, and,  most importantly, to make the whole diaspora feel like a full-fledged  beneficiary of the Republic of Armenia. we hope to decide with your  participation, and with the participation of our other structures and  parties of the diaspora, "he said.

Chairman of the Armenian Liberal Democratic Party of the West Coast  of America Raffi Balyan welcomed the Prime Minister of Armenia. "Our  party, which is a traditional Armenian party, operates in Western  America, especially in the cities of Fresno and Los Angeles. We  continue this patriotic activity today, and we always support Mother  Motherland," he said. Members of the party's leadership noted that  they support the Prime Minister of Armenia and support the  government's wide-ranging reforms aimed at the progress and  prosperity of Armenia.

The meeting discussed issues related to the strengthening of  relations between Armenia and the Diaspora, the development of  Armenia, the full involvement of the diaspora in the ongoing  processes.  Recall that the Prime Minister of Armenia Nikol Pashinyan  will pay a working visit to the United States on September 21-26. The  first three days he will be in Los Angeles, and September 23-26 -  will leave for New York.