Acting Heads of NSS and Police of Armenia Appointed 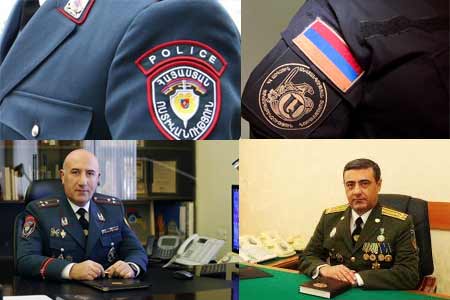 Eduard Martirosyan was appointed deputy director of the department,  and Arman Sargsyan, first deputy law enforcement agency, became the  acting head of the Police. This was announced by the Prime Minister  of Armenia Nikol Pashinyan on September 19 before the start of the  cabinet meeting.

It should be noted that Eduard Ashotovich Martirosyan (b. 1974) has  been serving in the national security bodies since 1998. On October  16, 2018, by decree of the President of the Republic of Armenia, he  was appointed deputy director of the NSS. Arman Sargsyan (b. 1978),  has been serving in the Ministry of Internal Affairs since 2000. On  March 18, 2018, he was appointed to the post of First Deputy Head of  the RA Police.

Recall that on September 16, Prime Minister of Armenia Nikol  Pashinyan announced during a press conference that he was sending the  head of the National Security Council Artur Vanetsyan to resign. On  the same day, the President of Armenia signed a decree dismissing the  director of the National Security Council. On September 18, the  president, at the suggestion of the head of government, signed a  decree releasing the head of the Police Valery Osipyan from his post.  On the same day in the evening, Osipyan was appointed chief adviser  to the Prime Minister.

As the head of the office of the Prime Minister of Armenia Eduard  Aghajanyan stated after the meeting of the board of the "Civil  Agreement" party in power, the resignations of the heads of the  National Security Council and the Police were personally initiated by  the Prime Minister of Armenia, and this is the main focus that should  be paid attention to. As a board member of the State Duma pointed  out, the activities of two officials, former heads of the SNB and the  Police, did not satisfy the Prime Minister. To a clarifying question,  what exactly did not satisfy the prime minister, in particular, in  the work of the head of the National Security Council, which, unlike  the former heads of the national security agency, was distinguished  by loud exposures of corrupt officials, Eduard Aghajanyan recalled  the words of Pashinyan that, given the specifics of the work of the  National Security Council, go into details. When asked why Valery  Osipyan was appointed chief adviser to the head of government, the  head of staff noted that it was possible that the prime minister  considered that the former chief police officer would be useful in  this status.

"It seemed to some corrupt officials that the National Security  Service was confusing and they could" arrange their murky affairs,  "Prime Minister Nikol Pashinyan wrote on his Facebook page in the  evening." In the new Armenia, the NSS is not a person, but a system  and it will prosecute all current and former corrupt officials, spies  and other similar elements, "the prime minister said. According to  him, this also applies to the Investigative Committee, the Special  Investigation Service, the Prosecutor General's Office, the police  and the investigative department of the Committee on state revenues.