Over 10 years, 495 children were adopted by foreign citizens from 6  orphanages in Armenia, and only 116 by local citizens 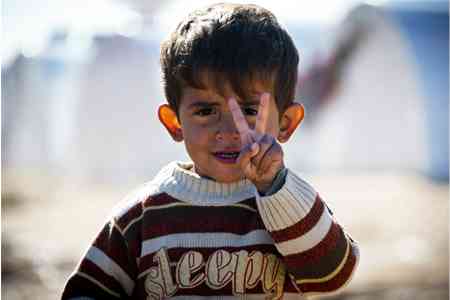 ArmInfo.The Ministry of Labor and Social Security is in the process of reform, in particular in the field of adoption of children, taking into account all the risks that  existed under the previous system of government. Anahit Kalantaryan,  head of the department for children's affairs of the RA Ministry of  Labor and Social Affairs, stated this in an interview with ArmInfo.   The ministry explained that children in difficult situations were  entered into a closed database to help potential foster parents for  the adoption procedure.

<This database is private and secret. The database includes children  without parental care, children with disabilities, children from poor  families. All of them belong to the category <children at risk>.  Information on vulnerable categories of children is provided by the  municipalities of the communities and the Mayor's Office of Yerevan,  after which the Ministry is already contributing these data to the  state resource. In addition, those wishing to adopt a child are also  included in the database>, Kalantaryan explained, noting that the  database for adoption in Armenia from the beginning of 2019 to this  day has 42 children, and 11 children have already found new families.

"According to our legislation, data on those children who have not  been adopted by RA citizens for 3 months are redirected to the  Ministry of Justice to consider the issue of their international  adoption," she added.

Note that for the period from 2008-2018. out of 6 orphanages, 495  children were adopted by foreign citizens, and 116 children by local  citizens over the same period.

Touching upon the issue raised at a government meeting on the  existing risks in child adoption procedures identified as a result of  research, Kalantaryan explained that the final results of the study  will be presented in the short term.

She noted that the government meeting was held behind closed doors.  <We want to introduce new paragraphs, provisions in the legislative  field to reduce possible risks during adoption. These risks are  numerous. However, only after the results of the study and the  revealed difficulties can we provide more specific information>, she  added, noting that the requirements for adoptive parents and the  range of tasks related to the adoption process itself will be revised  as part of the new reforms.  According to Kalantaryan, in addition to  collecting additional documents, it is also planned to introduce  training courses for foster parents, and to reduce the barriers  between orphans and foster parents, the ministry will create a video  database with profiles of children. "This will make it possible to  exclude some risks, in particular, related to psychological  incompatibility in the family," Kalantaryan explained.  According to  her, it is also planned to introduce mechanisms to control the fates  of adopted children.  Every 6 months for 3 years monitoring will be  carried out, if necessary, monitoring will be more systematic.  <Considering that in most cases children get to shelters because of  adverse socio-economic conditions, because of mental disabilities and  the presence of disabilities in their parents, the ministry is trying  to assist these people by involving their colleagues in solving these  issues, "said Kalantaryan, recalling the memorandum on preventing  children from entering orphanages due to disability, signed by the  Ministry of Labor and Social Security, the Ministry of Health and the  public organization "Good Mother".

In turn, the lawyer, director of the legal office of "Di Hey  Consulting" Irina Danielyan believes that the reform of the social  sector in Armenia at the moment does not proceed from a single social  policy, and are mainly tactical rather than strategic.

When asked about how much the state protects the rights and interests  of children during adoption, the lawyer noted that in order for  adoption to comply with the provisions for the protection of human  rights and other obligations, numerous procedural issues need to be  addressed.

<Most of the problems identified are related to gaps in the system,  and not to individual criminal or unethical acts. Problems more  likely arise with international adoption, in which children are  passed for adoption to citizens of other states.

<The fact is that the choice of foster parents for a particular child  basically depends on one official and is out of control. In addition,  observers from other institutions that oversee this area cannot  attend the adoption commission meetings, and sound recordings of  these meetings are not kept. These circumstances may cast doubt on  the transparency and objectivity of the adoption process>, she added.   The lawyer of the RA Chamber of Advocates, the chairman of the  Armenian Representative Office of the International Union  (Commonwealth) of Advocates Vardan Khechyan noted that the most  important thing in the adoption of children is that the adoptive  parents are morally stable and not harm the child, as well as be  provided in material terms. According to Khechyan, the time has come  to introduce the corresponding changes in the legislative field,  contributing to the liberalization of the adoption procedure, to make  it more accessible.

It should be noted that over the past 50 years, international  agreements have been developed and adjusted that regulate the  changing landscape in the field of adoption and the serious problems  that arise in this regard. The Convention on the Rights of the Child  is currently the main normative document on adoption at the global  level. The 1993 Hague Convention is dedicated to the protection of  children and cooperation regarding foreign adoption.

Relevant standards are also established on the basis of the  jurisprudence of the European Court of Human Rights. Changes and  amendments to the laws of the Republic of Armenia related to the  procedure for adoption of children, as a rule, are the result of  monitoring by a number of international organizations and experts who  identify current problems and shortcomings in the laws of the  Republic of Armenia. More recently, some amendments to the RA Family  Code have also been introduced.