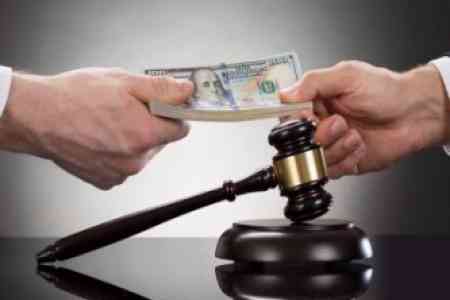 ArmInfo. The senior prosecutor of the Prosecutor General's Office of Armenia is accused of taking bribes on a large scale.

As the press service of the Prosecutor General's Office told ArmInfo,  on the basis of the materials in the criminal case filed in the  National Security Service of Armenia, the acting The RA Prosecutor  General's Office made a decision on bringing the senior prosecutor of  the Ministry of Justice L. K as an accused on the grounds of part 3  of Article. 311 of the RA Criminal Code.

According to the ministry, in the framework of the criminal case  under investigation, sufficient evidence was obtained that the senior  prosecutor of the Prosecutor General's Office, using his official  powers, in June of the current year demanded and received a bribe on  an especially large scale in order not to hinder the petition during  the trial. Conditionally early release from custody of G. G., who in  2013 was sentenced to 10 years in prison for robbery under  aggravating circumstances (paragraph 3 of part 3 of article 175 of  the RA RA).

The powers of the prosecutor L. K are suspended. The Yerevan Court of  First Instance submitted a petition to elect a preventive measure  against him. The investigation of the case continues, all necessary  measures are taken for a comprehensive and objective investigation of  the case.