Sanitek turning Yerevan into waste landfill accuses the new mayor,  who in turn is assured in the contractor`s malpractice 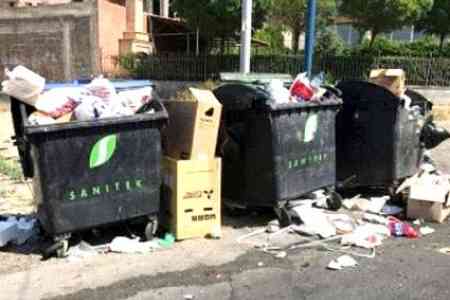 ArmInfo. S Sanitek cannot fulfill payment obligations towards subcontractors solely due to unconstructive actions of the Municipality. This is stated in the  official statement of the company.

"At the moment there are financial difficulties in the company, which  are caused, among other things, by unjustified and disproportionate  sanctions and unjustified fines applied by the Municipality," the  source noted. In particular, the statement says that Sanitek never  refused to pay subcontractors, suppliers or employees.

Referring to the wording voiced by the mayor of Yerevan at a working  meeting in the Municipality that "no one dares to speak with the  Yerevan citizens with blackmail", the company claims that it has  never spoken or spoke with blackmail. "As for sentimental thoughts  voiced by the mayor, they further complicate the already difficult  situation and lead the constructive dialogue initiated by the  company's shareholders into a dead end," the statement said.  In the  near future, Sanitek, which carries out waste disposal in Yerevan,  intends to convene a press conference, during which all the facts  that had not been voiced before will be presented.

In the near future, Sanitek, which carries out waste disposal in  Yerevan, intends to convene a press conference, during which all the  facts that had not been voiced before will be presented.

To recall, earlier the mayor of Yerevan Hayk Marutyan gave an  interview to Civilnet, in which he spoke, including about the  situation around one of the key problems of the city - garbage  disposal. In particular, the mayor stressed that the technopark of  the Sanitek company, which is responsible for garbage collection, the  sanitary cleaning of the streets in the city is in an inadequate  condition, to put it mildly, which, in his opinion, is due to the  fact that the relevant work was not carried out realized investments.   "We provided funds in a timely manner, which means that they were  obliged to conduct their work properly," he stressed.

According to Marutyan, the company's problems began in 2017, the peak  of which fell in the summer of 2018. After accepting the position of  mayor, he was able to persuade contractors to cooperate with Sanitek  to solve the problem of garbage collection, since the latter doubted  whether the company would fulfill its obligations. "I have repeatedly  appealed and called for Sanitek to renew its transport, to provide  the necessary number of ballot boxes in the city, the number of which  is about 5 thousand, instead of the necessary 16 thousand," he said.

In addition, the mayor said that as a result of the work done,  "KAMAZ" trucks will be brought to Yerevan at the end of July,  although according to the contract the vehicles should have been in  Yerevan only in September. <I will try to quickly resolve this issue>  - he stressed.