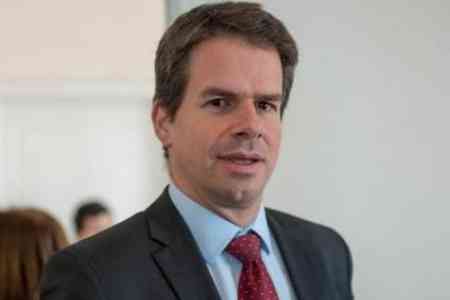 ArmInfo. The changes taking place in Armenia open a new stage in French-Armenian relations. French Ambassador to Armenia Jonathan Lacote stated this in Yerevan  at the solemn celebration of Bastille Day, the National Holiday of  France.

<I am glad to be in Armenia at this stage, when unprecedented changes  are taking place in your country, when all the energy is directed  towards building a better future. I am deeply convinced that the  changes that have taken place in Armenia open a new stage in  French-Armenian relations. And France wants to be at the same level  with Armenia, and we are happy to establish new foundations for our  relations at the inter-university level, in the educational sector,  in the cultural field and in the economy, where we still have a lot  to do, "the diplomat emphasized.

He also welcomed French companies that invest in Armenia, promote  economic growth, create jobs and pay taxes in Armenia and thanked  Armenian partners who promote the development of relations between  the two countries. <The relations between France and Armenia are  unique. They come from the heart. Be certain that we are touched by  your love for France, our values, culture and language. Be rest  assured that France will always stand by the side of the Armenian  people and will protect you within the United Nations, the European  Union and as a co-chair of the OSCE Minsk Group," the diplomat  concluded.

In turn, Deputy Prime Minister of Armenia Mher Grigoryan expressed  gratitude for the position of France in all matters of importance to  the Armenian side. "We highly appreciate the efforts of France as one  of the OSCE Minsk Group co-chairs on the peaceful settlement of the  Nagorno-Karabakh conflict, as well as the decision of France to  declare the Armenian Genocide on April 24," Grigoryan said, stressing  the commitment to further deepen and expand the Armenian-French  exclusive relations.

Bastille Day in Armenia was celebrated on a grand scale. The evening  was opened by the string quartet of the Republican Guard, as well as  soloist of the Choir of the French Army Jeremy Delver, who performed  the anthems of France and Armenia.