Donald Tusk: Positive dynamics observed in Armenia after the  revolution created new opportunities for cooperation with the  European Union 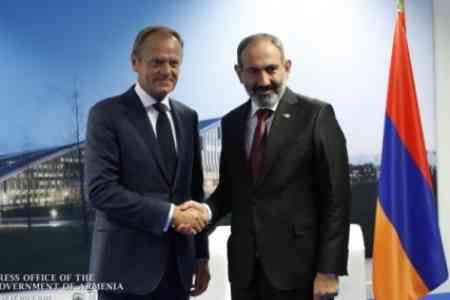 ArmInfo.The current head of the EU is inspired and encouraged by the progress recorded by the government of Nikol Pashinyan. The EU will continue close cooperation with the  RA and Prime Minister Pashinyan for the benefit of all Armenians. The  European Council Chairman Donald Tusk said this on July 10 after a  meeting with Armenian Prime Minister Nikol Pashinyan.

According to him, this is his first visit to Yerevan after the  "velvet revolution." According to Tusk, the positive dynamics in  Armenia created new opportunities for cooperation with the EU. "My  visit to Armenia testifies to the high significance of the EU's  relations with Armenia and the region," he said.

Today's discussion, as he said, speaks about the productivity of the  implementation of EU-RA cooperation in the framework of the  Comprehensive and Enhanced Partnership Agreement (CEPA) between  Armenia and the EU. "This ambitious document is intended to assist  the process of modernization of Armenia, and the EU will continue to  provide technical and financial assistance towards the implementation  of the Agreement," Tusk noted.

As noted the head of the European Council, the parties reaffirmed the  importance of ensuring the rule of law, combating corruption and  respect for human rights. "A solid judicial system is a significant  component in ensuring the democratic and socio-economic development  of the country," he said, stressing that the EU will continue to  assist in this area, using its expertise and additional tools.

In addition, according to Tusk, during the meeting they discussed the  creation of a specialized anti-corruption commission. "Highly  appreciating the efforts of the Armenian government in the direction  of reforms, the EU almost doubled its assistance to Armenia for 2019.  The funds will help in the implementation of priority programs,  including infrastructure and environmental protection, "he said. In  this context, the head of the European Council noted that today he  will visit Sevan Lake, where the EU is supporting reforms in the  sector of water management. "There will be an occasion to visit "  Sevanavank " (a monastery on the peninsula) - a monument that is  evidence of Armenia's millennial influence on European culture," Tusk  said.

The Prime Minister of Armenia and the head of the European Council  also discussed the "unresolved Karabakh conflict". "The EU is  inspired by the dynamics and is ready to assist in the preparation of  nations for peace, with an emphasis on the humanitarian aspect," he  said.  The EU, as noted by Tusk, shares the concerns of the OSCE  Minsk Group co-chairs regarding the victims on the contact line in  recent times.

According to Tusk, the parties should exercise self-command and take  measures to restore the atmosphere conducive to establishing peace  and conducting meaningful negotiations.  "The conflict has no  military resolution and requires a political solution that will  comply with the principles of international law. The EU will continue  to support the efforts of the OSCE MG in the search for fair and  durable solutions, " Donald Tusk concluded.