US congressman introduced an amendment blocking the sale to  Azerbaijan of armaments increasing this country`s ability to shoot  down civilian aircraft. 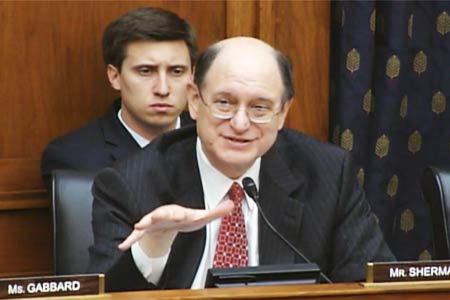 ArmInfo.Congressman Brad Sherman, a senior member of the Foreign Affairs Committee of the House of Representatives, presented an amendment on June 25 that would block strengthening the capabilities of Azerbaijan's offensive strike, the  Armenian National Committee of America (ANCA) reported.According to  the source, the initiative aims to prevent Baku from being a constant  threat to civil aviation of the Artsakh airport in Stepanakert.

"This amendment will send a strong signal to Azerbaijan that it  cannot threaten to shoot down civilian aircraft. Azerbaijan should  not be intimidated by its neighbors. The last thing we have to do is  help in some way to strengthen Azerbaijan's air defense," Sherman  said by amending.ANCA Executive Director Aram Ambaryan, in turn,  noted that the amendment will show Azerbaijan that the United States  unequivocally opposes any type of threat to destroy civilian  aircraft.The Household Regulations Committee of the United States  House of Representatives is expected to convene after Independence  Day within a week to consider whether this amendment and the hundreds  of others proposed in the National Defense Authority Act will be  approved (National Defense Authorization Act -NDAA).