Polish diplomat: To initiate EU-EAEU dialogue, it should be first  defined what the EAEU is 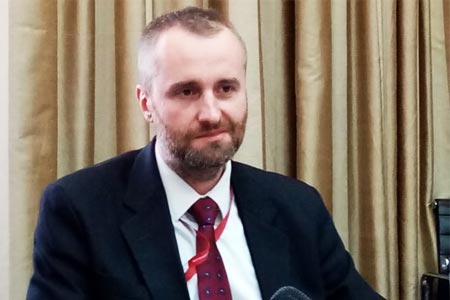 ArmInfo.Before initiating a dialogue and, moreover, any kind of cooperation between the European Union and the Eurasian Economic Union, it should be defined first  what the EAEU actually is, Deputy Director of the Eastern Department  of the Ministry of Foreign Affairs of Poland, Rafal Poborski  expressed a similar opinion, answering the question of ArmInfo.

A group of Armenian journalists within the framework of a press tour  organized by the Polish Embassy in Armenia visited Warsaw on May  25-30, where they had the opportunity to meet with Polish diplomats,  politicians, MPs, representatives of public organizations.

"The main problem is the lack of a full-fledged supranational body in  the EAEU capable of making collective decisions that would, at the  same time, reflect the will and desires of member countries. In my  opinion, the Eurasian Economic Commission did not succeed as such.  And I, for example, have never heard of Kazakhstan's dissatisfaction  with one or another decision taken by the EEC, "the Polish diplomat  emphasized.

He noted that even between 28 EU countries problems arise in making  decisions that require general consensus. And, nevertheless,  decisions are made collectively by one supranational body. In this  light, the Polish diplomat is pessimistic about the very possibility  of starting a serious dialogue with the EAEU.  According to his  estimates, it is precisely on the basis of this state of affairs that  Brussels prefers to conduct a dialogue with each of the EAEU member  countries separately.