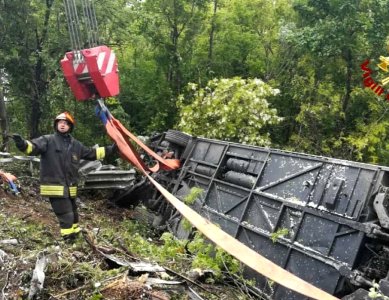 ArmInfo. As a result of an  accident of a tourist bus in Italy, two Armenian citizens were  injured.According to the Armenian Embassy in Italy, Margarita  Gulumlyan (b.  1982) and Nina Mehrabyan (b. 1987) suffered in a  traffic accident. "Nina Mehrabian received minor bodily injuries and,  after receiving the necessary medical care, was discharged from the  hospital.

Gyulumyan is being examined by doctors," the Armenian Embassy  said.Note that the bus tourists from Eastern Europe turned over in  the morning on May 22 on the highway Siena - Florence. The incident  occurred around 09:00 local time, about 7 km from Siena. According to  rescuers, there were 60 people in total on the bus. According to  preliminary data, one person died as a result of the incident, ten  were injured.