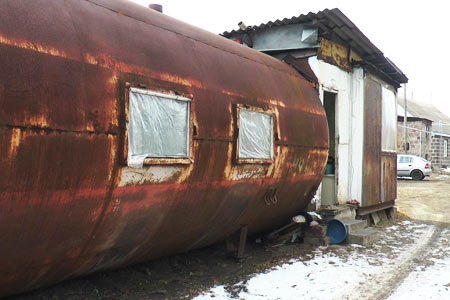 ArmInfo.These days, socially insecure families living in different provinces are being informed about being included in the housing program. The Sahakyans, who have lived in a metal container in Spitak town for 30 years, are now in the center of attention of partner organizations, VivaCell-MTS and Fuller Center for Housing Armenia.

Seryozha does not remember anything from the 1988 earthquake; he was only three years old when the disaster struck. He has learned about the destroyed house, the loss of his father and brother from his mother's stories. Over 30 years, from early childhood, he has lived in a metal container. Now a young father of two, he tries to find a solution; he has added another metal container to the already existing one, but still, the metal area has remained depressing and not fit for living. There are now five of them living in the metal container.

Seryozha dreams of building the house of his childhood. Years ago, he initiated construction works in the same locale. To accomplish the goal, he has travelled abroad to work for many times. With the help of relatives and friends, he has started building a house on his own, which has remained unfinished. He can't do more due to the lack of financial means.

By the end of the year, VivaCell-MTS and the Fuller Center for Housing Armenia will make the dream of the family from Lori region a reality. The Sahakyans are selected in the housing program of the current year.

“For many years, and hand in hand with the Fuller Center for Housing Armenia, we have spared no effort to return the light of hope to more than 150 families. Stories of their lives may vary, regions they live in may vary, reasons behind the hardships they face may vary, but there is one problem they all share. We perk up with every single beneficiary family rising from its knees. We announced the start of this year’s program with a surprise phone call to one of our beneficiaries. I now call on this family by television: stay strong. With our partners, we will make your years-long dream come true by end of this year,” VivaCell-MTS General Manager Ralph Yirikian said.

Fuller Center for Housing Armenia is a non-governmental, charitable organization that supports community development in the Republics of Armenia and Artsakh by assisting in building and renovating simple, decent and affordable homes, as well as advocating the right to a decent shelter as a matter of conscience and action. FCHA provides long-term, interest-free loans to low-income families. The monthly repayments flow into a Revolving Fund, which is used to help more families, thereby providing a financial foundation for sustainable development. Since 2008 the Fuller Center for Housing Armenia has assisted about 700 families. For more information, please visit www.fcharmenia.org or email us at fcarmenia@fcharmenia.org