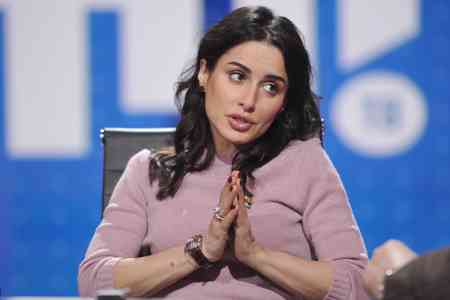 ArmInfo. All Armenians on the planet today mourn in memory of the dead ancestors, wrote the general director of the TV channel "Match TV" Tina Kandelaki on the day of  memory of the victims of the Armenian Genocide.

She noted that the exact number of people affected by physical  violence and deportation in conditions that excluded survival is  unknown.

"When we recognize even one death as a tragedy, how can one treat the  death of more than a million people who are guilty in the eyes of  their executioners only that they were Armenians by nationality?" She  asks, reminding that she is half Armenian and April for her personal  tragedy.  "Armenian mother gave birth to me, Armenian grandmother  raised me, I speak Armenian, and words of sympathy for me are not  just a gesture of joining millions of Armenians to the sorrow. This  is also my personal pain," Tina said.

"Today I mourn together with my relatives, friends and all those who  empathize with the victims of the Armenian Genocide. I am sure that  the recognition and condemnation of this historical fact is an  important step that will help prevent the recurrence of such events,"  the general director of "Match TV noted.