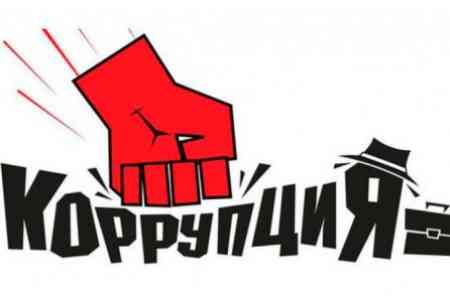 In the subdivisions of the Committee, 1.233 criminal cases were  instituted on the facts of crimes of a corruption nature, of which  1.077 were accepted for proceedings. The press service of the RA IC  informs.

14 cases were associated with bribery, 3 with bribing participants  and organizers of professional sports competitions and solemn  commercial competitions, 78 with abuse of authority by employees of  commercial or other organizations, 194 - abuse of power or authority  41 - abuse of office, 89 - receiving a bribe, 143 - illegal obtaining  by a public servant who is not an official, 4 - using real or  perceived influence, 39 - giving a bribe, 4 - illegal compensation in  general chinery employee who is not the official, 3 - a request for a  bribe, 111 - forgery, 11- unauthorized seizure of land plots that are  state or municipal property, 11 - willful default of judicial  decisions, 125 - abuse of power.

Investigation of 107 criminal cases was completed with the  indictment, and the proceedings of 341 were discontinued. Production  in 21 criminal cases is suspended. According to the police, 58  criminal cases were sent to the court. 464 criminal cases were  transferred to the prosecutor's office in 2019. 335 people were  prosecuted for unfinished business. 398 officials were prosecuted.  Criminal prosecution officials committed corruption crimes in the  following areas: health care - 13 defendants and 1 suspect - director  of the clinic, director of the Medical Center, director of the  hospital, director of the community checkpoint, infectious diseases  specialist; Education-33 accused and 2 suspects - director of the  institute, head of university reserves, director of the university's  printing office, school director, school accountant, associate  professor of the university department, head of education, sports and  culture at the regional administration, college director,  kindergarten director, department head, deputy director special  school. In the law enforcement system - 1 accused is the security  officer of the RA State Police.

In the defense sector - 2 accused - Deputy Head of the Department of  the Contact Center and Security Zone of the RA Ministry of Defense,  former head of the financial department of the Material and Economic  Support Department.

In the field of energy and natural resources - 2 accused - director  of a branch of forestry, deputy head of the state property management  department.

In other areas - 91 accused and 2 suspects - director of the library,  loan officer, employee of the Employment Agency, Forester, Engineer,  Head of Reserve, Director of SNCO, Director of the House of Culture,  Manager of the Bank, Deputy Manager of the Bank, Executive Director  of LLC, Chief Specialist of the Service Office of the Office of the  State Cadastre Committee, Director of LLC, Technical Inspection Head  of the same LLC, Deputy Head of Environmental Inspection of the  Ministry of nature protection of the Republic of Armenia, state  inspectors, head of the probation department of the city of Yerevan  of the Ministry of Justice of the Republic of Armenia, others.