Turkish human rights activist: Our struggle for recognition of the  Armenian Genocide by Ankara will be consistent 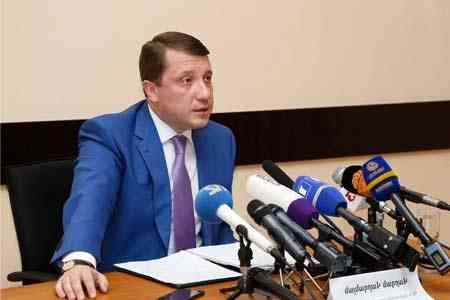 ArmInfo. On April 22, the Chairman of the NA Standing Committee on State and Legal Affairs Vardan Vardanyan met with members of the German organization "Union  against Genocide".

Welcoming the guests in the parliament, V. Vardanyan stressed the  importance of the organization's efforts in the recognition of the  Armenian Genocide by Turkey. According to the chairman of the  committee, at the heart of the genocide lies misanthropy, against  which relentless struggle is necessary. "In 1930-1940, Germany was a  developed, civilized country, but as a result of misanthropic  propaganda, the Holocaust happened," said the deputy. He noted that  recognition and appeal to the past for the Turkish people is a pledge  to build a just and democratic state. According to him, in the XXI  century it is impossible to live with a clear conscience, without  turning to own history.

The chairman of the organization "Union Against Genocide" Ali Ertem  said that their structure is fighting for the restoration of justice.

"For 20 years in a row we have been struggling to make Turkey to  recognise the Armenian Genocide. We are trying to keep this issue on  the agenda of Turkey," he said. According to Mr. Ertem, their  organization is also fighting to restore the fair trial of the Pontic  Greeks, Assyrians, Yezidis and other peoples subjected to genocide in  the territory of Asia Minor. Turkish human rights activist assured  that their struggle will be consistent.

The meeting was attended by German students of different ages. The  chairman of the organization noted that the new generation should  know the whole truth about the Armenian Genocide. On April 24, they  will visit the memorial in Tsitsernakaberd - to participate in the  procession with torches.  At the end of the meeting, Ali Ertem  presented the chairman of the committee a book on the Armenian  Genocide in German and large-format photos.