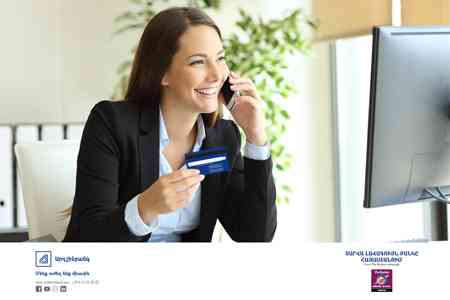 ArmInfo. Ardshinbank, emphasizing the importance of digital services, activated the "Money Transfer by Phone Call" service. As ArmInfo explained to the press service of the bank, having called the toll-free number 080002222 and having passed  the identification, you can order the transfer of the transfer to  your current account in Ardshinbank. The Bank for money transfers  cooperates with the systems MONEYGRAM, UNISTREAM, INTEL EXPRESS,  SIGUE, MONEYTUN, RIA, etc.

According to the source, in case of a money transfer in foreign  currency, the conversion is carried out at a preferential rate.

The message notes that the above phone number works 24/7, the  transfer of the amount to the recipient's account is instant. The  exceptions are the calls received after the transaction day, but in  this case, the transfer of the beneficiary's account, however, is  made on the next  banking day.  The list of money transfer systems  with which Ardshinbank cooperates is presented on the bank's website  at https://bit.ly/2UsA3OI.  According to the Financial Rating of  Banks of Armenia, as of January 1, 2019, prepared by the ArmInfo IC,  Ardshinbank is in the TOP-5 in terms of income from remittances,  increasing their volume in annual terms by 38.1%. In 2018,  Ardshinbank increased its net profit by 48.6% - to 8.2 billion drams,  taking the second position in the market by this indicator.  To note,  Ardshinbank was founded in 2003. The majority shareholders of  Ardshinbank as of January 1, 2019 are Arins Group LLC (formerly  called Business Investment Center LLC) with a 67.97% share in the  capital and REGION Industrial and Financial Corporation CJSC -  29.52%. Ardshinbank is the second largest bank in Armenia, having one  of the largest branch networks, with 64 branches. Ardshinbank was  assigned credit ratings of two international rating agencies (Moody's  and Fitch), equal to the country rating of Armenia.