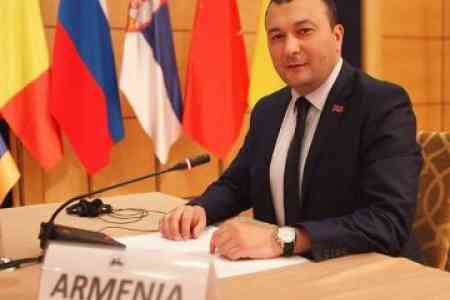 ArmInfo. On February 12, the  RA NA Vice President Vahe Enfiajyan met with the EU Special Representative for the South Caucasus and the Crisis in Georgia Toivo Klaar, the political advisers Atanas Baltov and Karin Marmsoler, the press service of NA of Armenia reports.

The NA Vice President has presented the political changes occurred in  Armenia during recent period, has touched upon the extraordinary parliamentary elections, noting that they differ from the previous ones from the free, competitive, transparent and democratic viewpoint.

The interlocutors highlighted the regular contacts and the exchange  of thoughts on different issues within the EU Special Representative's mandate.

In the course of the meeting the sides referred to the Karabakh  conflict settlement. The NA Vice President has noted that Armenia is faithful for the peaceful settlement of the issue in the framework of the OSCE Minsk Group Co-Chair format and emphasized the manifestation of the Artsakh people's right to free will.

The EU Special Representative has underlined that the goal of his  mission is to show support to the OSCE Minsk Group Co-Chairs, and he personally will spare any effort for promoting the NK conflict peaceful settlement process.

Vahe Enfiajyan expressed hope that Toivo Klaar with his activity  would also contribute to the deepening of Armenia-European Union relations.