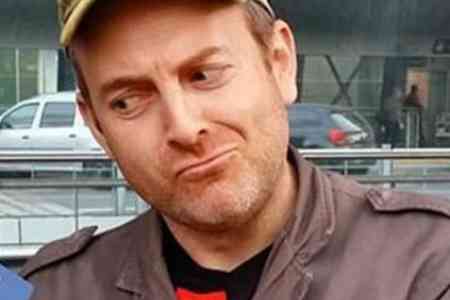 ArmInfo. "I accuse  Azerbaijan of the attempting to kill me on September 10, 2017 in a  Baku prison," a famous blogger Alexander Lapshin told ArmInfo's  correspondent, commenting on the beginning of communication of the  European Court of Human Rights with Baku.

According to the blogger, the authorities of Azerbaijan were obliged  to protect him, but did not do that.  "It's not important now, who  organized the murderous attack the clans hostile to Aliyev, or Aliyev  himself, ," Alexander Lapshin emphasized. He recalled that three days  immediately after the assassination attempt, the President of  Azerbaijan pardoned him. "Although I have never admitted my guilt and  did not ask for pardon," the blogger remarked. He also reported that  after arriving in Israel, he was immediately taken off the plane to  the hospital, where the conclusion on murder attempt was made.  "Israeli experts described the nature of the injuries as a murder  attempt. Then, experts in Russia, the Netherlands and the USA came to  the same conclusion," Alexander Lapshin said. He stressed that,  despite the attempts of Baku to put pressure on the ECHR, the lawsuit  was accepted for consideration in the spring of 2018. And yesterday  it became known that the court considered the arguments of the  claimant justified for the commencement of proceedings against  Azerbaijan. Baku has been given three months to submit its  objections, after which the ECtHR will begin consideration of the  case on its merits.

To recall, at the end of 2016, Lapshin was detained in Minsk at the  request of Azerbaijan, which put him on the "black list" for visiting  Karabakh without agreement with the Azerbaijani authorities. The Baku  Court of Grave Crimes convicted a citizen of Russia and Israel  Alexander Lapshin "for illegally crossing the state border of  Azerbaijan as part of a criminal group," sentencing him to three  years in prison. Later, the blogger was extradited to Azerbaijan. On  September 10, 2017, while Lapshin was in prison, the media circulated  a message about his suicide attempt. The very next day, the President  of Azerbaijan signed an order for his pardon, after which he left for  Israel. After his release, the blogger said that murder attempt was  made against him in a Baku prison.