In Yerevan, the initiative "Take a step, turn down Serzhu" began the  action of civil disobedience 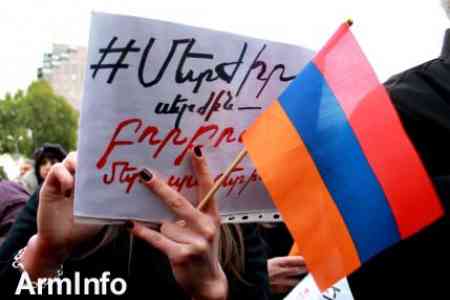 ArmInfo. In Yerevan, the initiative "Take a step, reject Serzh" began the action of civil  disobedience. Earlier in the evening, the leader of the initiative, Nikol Pashinyan, called to block various streets of Yerevan and subway stations from 8 am.

Today in the morning it was already announced that the metro station  them. Baghramyan will not work, probably to prevent the possibility  of approaching the building of the National Assembly, where tomorrow  the elections of the new prime minister will take place, which is  currently under the enhanced protection of the forces of law and  order. In the morning, the opposition tried to block the metro  station "Yeritasardakan", but the police prevented the action and led  the activists outside. The movement along some central streets of  Yerevan and the Davidashen bridge is also blocked. The Mashtots  avenue is closed, and the Druzhba metro station. K shares were joined  by the city of Gyumri.

Many cultural figures have already declared solidarity with the  opposition movement. In particular, the well-known musician Serge  Tankian addressed the activists to the activists, who stated his  solidarity and support, stressing the impermissibility of one-party  rule in Armenia. Some organizations of the Diaspora, in particular,  the Congress of Armenians of Europe, also expressed support for the  opposition.

In many European cities these days there were actions in support of  the Armenian oppositionists. Many opposition forces joined  Pashinyan's initiative these days, in particular Heritage party  leader Raffi Hovhannisyan, chairman of the Free Democrats Khachatur  Kokobelyan said that there is not a single oppositionist who should  not have stood on the French square today , where rallies are held.  The arrested members of Sasna Tsrer also announced their support for  the oppositionists. The Armenian authorities, according to ArmInfo,  do not intend to resort to any actions yet. They are waiting for the  first sabotage and provocation by the opposition.